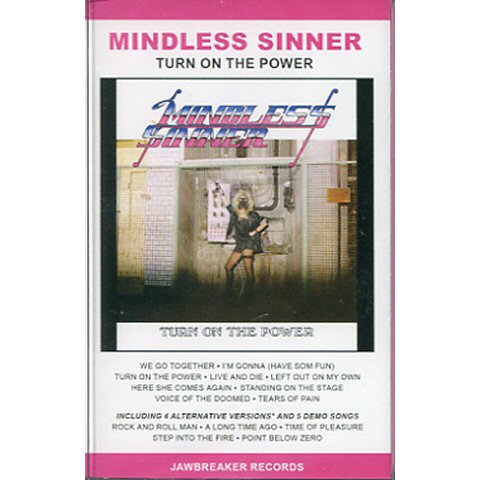 When I think of traditional metal, this is what I think. Why? Because that is what this is. I can’t hear anything here other than metal. This album is pure unadulterated fun metal. This is the only album Mindless Sinner released (and the EP Master of Evil and one album under the name of Mindless). Its 80s metal so you should know what you get. Sing out-loud choruses? Check. Standard heavy metal riffs? Check. Simplistic yet awesome solos? You bet. From the opening track, you know what you’re going to get from Mindless Sinner. Heck, the chorus of We Go Together can pretty much describe their career, but it’s a formula that is well executed. As with most bands from the traditional metal scene, the music is the highlight and focus of these songs. The riffs are strong and, with help from Christer Goransson’s singing, give each of the songs a sense of energy and urgency. As strong as the riffs are, they aren’t the focus. The riffs build/lead up to the chorus. That’s what this band is, chorus oriented rock n roll. That’s what all the songs on this album are, so if that isn’t your kind of metal, this isn’t the album for you. By traditional heavy metal standards, this album has a good amount of variation. Songs such as Tears of Pain, Voice of the Doomed, and Left Out on my Own. These are the songs that really break formula. Voice of the Doomed has a hammer-on riff, and has a lot darker feel to it than the albums other material, a good break from the norm. Left Out on my Own has a normal riff then sing-along chorus but is a lot more emotional than the other songs. Last up, Tears of Pain is a real ballad; it has a very nice sad atmosphere.