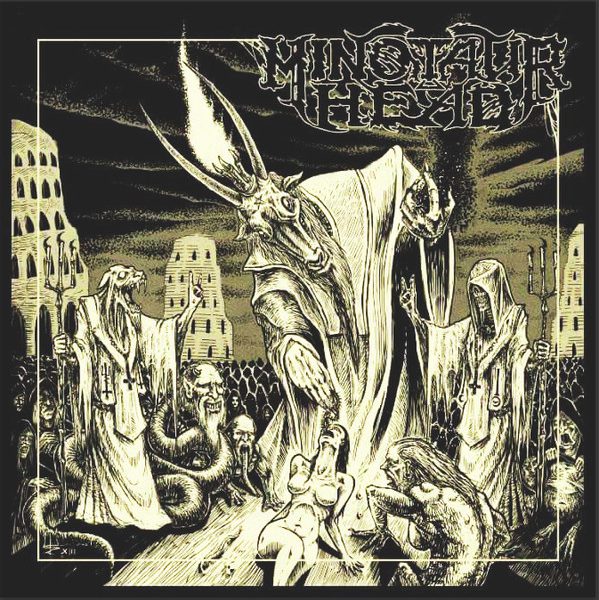 Minotaur Head (Holland/Sweden) is a doom/death supergroup led by Rogga and Bob Bagchus (ex-Asphyx) and rounded out by Theo van Eekelen (Hail of Bullets), Ronnie Björnström (Bone Gnawer, Ribspreader) and Björn Larsson (God Macabre). Together they’ve penned a nasty little gem of creeping ugliness with an righteous amount of Celtic Frost worship, and it’s been doing nothing but impressing me. It shares similarities with Hooded Menace and early Kuolemanlaakso, but it’s more memorable, even after just one spin. And the riffs, dear Lord the RIFFS!. Putting this thing in your audio thing is like opening a mystery parcel full of mucous-coated snakes. Before you can react, they’re all over your house and in every nook and cranny, leaving disgusting trails everywhere. Lead serpent “Drowning Life” freezes you in your tracks with a wicked biscuit of a riff that reverberates thick and grotesquely as Rogga does his best Tom. G. impression over the top. I’m talking HUGE riffs here, folks. The kind that make your organs quake and teeth ache. And the fact they exist in such a strangely catchy song makes the impact all the more sudden and hideous. But they didn’t stick all their big money riffs in the opening basket, no siree. “A Monument to Humanity” is one of my favorite songs that’s isn’t on the new Khemmis album. It’s rudimentary death/doom but done so well and with such addictive doom groove riffs, that it becomes a kind of juggernaut. “Only Lands for the Slaughter” mixes the best of Asphyx with the most obvious Celtic Frost influence for another 10-ton Zamboni of doom with riffs that flow like plague-ridden molasses, and they even drop in some fancy solo-work to boot. It’s just heavy, man! While the album’s best material is mostly confined to the front-half, closer “Realm of Filth” is a slobber knocker of a cut with mammoth riffs and some jangled, discordant leads. Front-loading aside, this is a consistent and entertaining trip through the murk and mire with no song feeling like filler. At 38 minutes, it’s the near-perfect length too, and though this is some of the most easy to digest death/doom I’ve heard in a while, you don’t want to push it much further than the band does. The production is quite effective at framing the oppressive riffs and making them achieve maximum heft. The guitar tone is huge and powerful enough to destabilize third world countries, just as it should be for this kind of music, and really elevates the quality song writing. As a long-time fan of Rogga’s death croakery, I think his performance here is one of his best. He sounds massive and ominous and his roars sit beautifully atop the distorted doom chugs. His little verbal nods to Tom Warrior are a treat as well and take me back to the days of spinning “Dethroned Emperor” and thinking it was the heaviest thing the world would ever hear. As good as Rogga is, this album is the ultimate in guitar-domination. With three guitarists in the band, they’re the doom/death Iron Maiden, and with much less spasmodic buffoonery. Ronnie Björnström and Björn Larsson are listed as the leads, and together with Rogga they lay waste to all in their path with sweet and simple doom riffs that crush you in that wet, pulpy way. It’s the quality of these riffs that immediately grabbed my attention and make Minotaur Head stand out from the pack. They aren’t doing anything unique, they just do it really well. They’re complimented by a highly seasoned backline with Bagchus on drums and Eekelen on bass, and the end result is tight and groovy. Minotaur Head are the ultimate in Neanderthal doom/death, but damn does it work and keep me coming back for more. Find this and feel the weight of divine oppression.

Track list:
1. Drowning Life
2. Hidden Death In The Permawinter
3. A Monument To Humanity
4. Only Lands For The Slaughter
5. A World Without Man
6. Mundane Treasures
7. Realm Of Filth