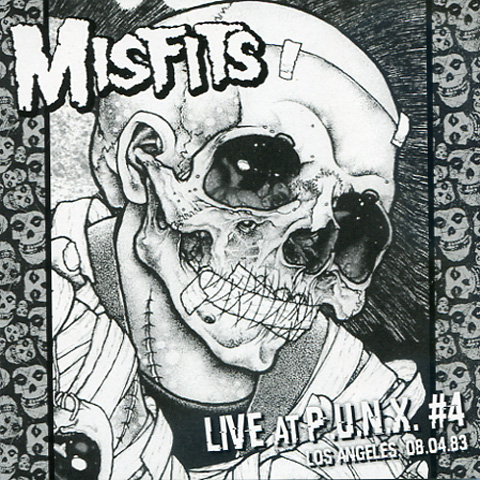 Legendary Misfits show that took place on Friday the 8th of April 1983 on the 3rd floor of an abandoned building in yet another rough-and-tumble area of Los Angeles. The place was called P.U.N.X. #4 and was located in the corner of 45th street and western. There were no signs telling you were this club was but some punks threw a mattress out the window with the word “PUNX” scrawled on it. Walking the stairs it was hard to believe that there actually would be bands playing here that night, or any night. The place was well-worn in and had some cracks on the walls and chipped paint everywhere, but who’s playing fixer-upper handyman when the Misfits are in the house? So when you read that Misfits were doing national tours for their Walk Among Us album then it might sound big, but the reality was that this was the kind of places they headlined. Five bands were on the bill that evening. The running order was Region Confusion (from Long Beach), Dr Know (from Oxnard), Crucifix (from San Francisco), Circle One (from Los Angeles) and headlining that night was New Yorks finest The Misfits. Crucifix didn’t play that night for a reason that cant be remembered, maybe it was such a simple reason that they couldn’t locate the place, who knows. So, Regional Confusion and Dr. Know blazed through their sets and then John Macias from Circle One (also part of the promoting team) jumped on stage to inform the crowd that the LAPD and locals were having words outside. Apparently, the rumors had spread that there were a punk show in the neighborhood and the locals wanted to beat the living daylight out of some punks. This didn’t stop the show and it went on and Circle One tore it up and when Misfits entered the stage it was like all hells broke loose. They performed a raucous set on this tiny stage. Misfits was as angry as ever and people were jumping off and on stage all the time, stage-diving and running into the band members. So think of this if hear that Doyle’s guitar is out of tune. You need some luck with keeping your guitar in tune while not only pounding it like a jackhammer you also need to try to avoid stage-diving mooks. By the end of the show you have several fans on stage singing the chorus of Night Of The Living Dead. After the show the cops ordered the crowd to say inside the venue as they tried to clear the area outside. There were sirens everywhere and it would take another 45 minutes before the police had split the angry mob and secured the area outside to let the punks out of the building. So to hear this album feels pretty much like a time travel back to those times where life were dangerous if you were into punk. With all this mind then its quite impressive to hear that the sound is surprisingly good considering the modest and extreme conditions of the event.