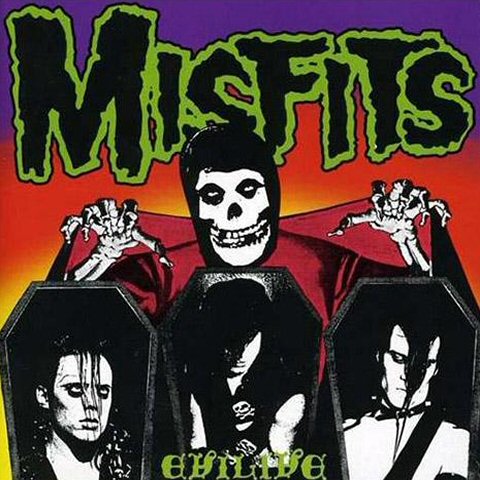 The Misfits first live album, Evilive, was recorded at a pair of shows in November (New Yorks Ritz Theatre) and December 1981 (San Franciscos On Broadway), then released all of one year later as a seven-song EP, before being augmented with five more songs for a 1987 reissue as a proper album. Mind you, these belated additions still only brought the sets entire run time to 24 minutes, which was actually a good representation of the legendary horror punk outfits intensely short but sweet performances. So too was its bootleg-quality audio fidelity, which authentically captured the seedy conditions of those often sparsely attended early-80s punk rock shows, warts and all. And, since The Misfits were never the most instrumentally talented or well-rehearsed band to begin with (even by punk rock standards — hear them botch the end of London Dungeon), Evilive saw singer Glenn Danzig (still more of a shouter than the crooning Evil Elvis of future days) virtually willing his cohorts through a slew of trademark two-minute B-movie tributes (Night of the Living Dead, Horror Business, Ghouls Night Out etc.), and often abusing the audience into showing their enthusiasm along the way. But of course it was precisely because their music transcended these technical deficiencies (see how Hate Breeders easily rose above the underlying tape hiss) that The Misfits innate magic has endured despite the band’s limited exposure throughout its career. Oh yeah, and despite featuring a few lesser lights from the band’s canon (Nike A-Go-Go, All Hell Breaks Loose), Evilive also boasted a historic encore cameo from then Black Flag singer Henry Rollins on an always anthemic We Are 138 classic!