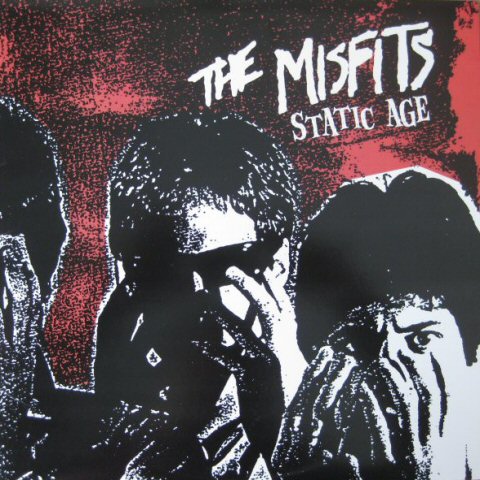 Genuinely shocking or tasteless, campy fun? It was sometimes hard to tell which way the Misfits wanted to be taken, and the immense cult following that has grown up in the years after their actual existence (1977-1983) seems divided in its own assessment. It certainly wasn’t the Misfits’ musicianship — which was as crude as the recording quality of most of their oeuvre — that endeared them to so many, although Glenn Danzig possessed one of the most distinctive and tuneful bellows in hardcore punk. Rather, it was Danzig’s penchant for catchy, anthemic melodies, often delivered at warp speed, and his lyrical obsession with grade-B horror films and splatter imagery that helped the Misfits build a rabid posthumous following. The album Static Age was recorded thanks to some studio time received in exchange for giving up an early label name claimed by another company, though unreleased in its original form until its appearance in the limited box set, Static Age shows that early on the Misfits’ particular vision was strong enough to last over a full-vinyl set. Full being relative, admittedly; like the band’s other few full-length efforts, Static Age barely cracks the half-hour mark, packing in 14 songs (plus a brief crackle of, naturally, static at the start and finish). Everyone in the band as they stood at the time just smokes; the recording quality is raw and strong, and those qualities which helped the Misfits stand out from the pack, especially Danzig’s amazing singing and Franche Coma’s fierce guitar takes on the singer’s melodies, are on fine display. There’s a fair amount of clangor and mess, to be sure, but it all sounds perfectly intentional, capturing a blend of punk mess, horror theatrics, and wicked humour that was theirs alone. Classics abound: TV Casualty with its blatant I Love Lucy end sample, the ridiculously entertaining sex fantasy Teenagers From Mars, the perfectly pissed off Attitude, and the crashed thrashers We Are 138 and Return Of The Fly. Then there’s the brilliant Last Caress, cartoon criminal punk idiocy turned into singalong madness later made famous by Misfits fanatics Metallica. The album was later issued as a full length album outside the box set with three more songs appended from the sessions, including Spinal Remains and a re-recording of She.