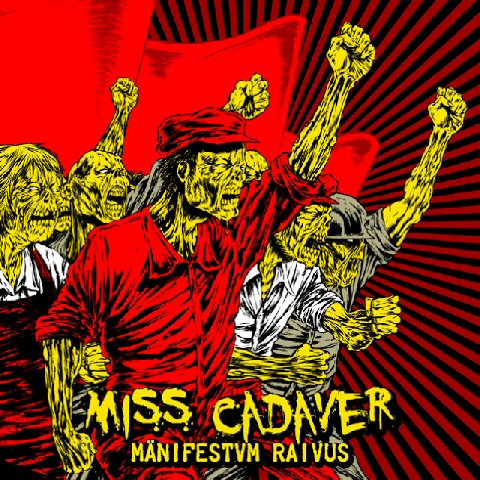 Miss Cadaver from Portugal was formed in 2009 in the area of Arruda Dos Vinhos, close to Lisbon, they have released a couple of demos, split recordings adn the debut album “Morte Ao Fado” in 2011. Their second album “Mänifestvm Raivus”, was released in the spring of 2017 and it shows an improvement in terms of both composition and lyric wise. The biggest improvement is however the final production when it comes to the sound. This album has been mastered and mixed by Paulo Vieira (F.N.I., Ironsword, Perpetratör). The thirteen tracks are loaded with biting lyrics as they band tries to make a manifesto of truth, regarding political, social and cultural issues, with their lyrics. The sound is very extreme when the band merges all kinds of genres from thrash metal, through death metal, grind, hardcore, crossover and punk. Sometimes sounding close to Brujeria. Despite the short running times of the tracks (13 tracks in 32 minutes) its still shows very varied compositions and the choruses is strong and catch your attention from the first hearing. The band also sings in Portuguese which suits the music perfectly. These 32 minutes running times is all that is needed and the 13 tracks is a well achieved work. Long live the cadaver