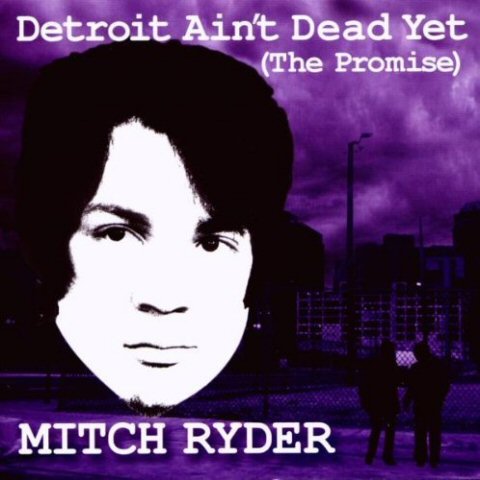 On his new album, Detroit Ain’t Dead Yet (The Promise), Mitch Ryder sings, “when I was a young boy I was always wasting time.” But his memory may be slipping in his old age — when he was younger he hardly wasted a moment. Coming up in the mid-’60s with his band the Detroit Wheels, Ryder blew through a hybrid of blues, soul, and rock and roll, often at a blistering pace. Like many ’60s bands (the Beatles and the Rolling Stones come to mind), he started out almost exclusively covering blues and soul hits: songs like Wilson Pickett’s “In the Midnight Hour”, Stax stalwart Rufus Thomas’s “Walking the Dog”, Sam Cooke’s “Bring It on Home to Me”. Ryder’s lead vocals were smooth enough to garner the “blue-eyed soul” label and rough enough for rock and roll. The Detroit Wheels were tight and fast, buoyed by youthful exuberance and love of the material, tight guitar work and a lithe horn section. The Promise contains almost entirely original material but unfortunately, his voice has lost most of the smoothness and liveliness; he still has some grit, but mostly he sounds like an uninteresting Americana singer you might find on any terrible radio station. To be fair, he is not trying to be as lively: the album’s title and political songs like “The Promise” indicate that he is trying to add a new gravity to his material. This seems to be in vogue with singers from the ’60s and ’70s who are putting out new material — Betty Wright explored some social ills in her recently released album as well. While the intentions of these singers are good, their results are not. “The Promise” starts like a Curtis Mayfield song from the early ’70s, with a wah-wah guitar riff and some hand percussion, but its vague funkiness is not enough to overcome its trite lyrics: “our lives will be better with/ the promise we receive/ my child/ will have doctors/ my child will have good schools/ my wife/ will have medicine/ my work will have good tools/ I see change and I’m/ feeling stronger.” It’s hard to listen to this, and Ryder’s voice is not pleasant or emotive enough to let the listener ignore the lyrics. Like Wright, Ryder did not try his hand at message music in his hey-day. Ryder tries it all on this album, funk, ballads, a Latin-tinged track called Let’s Keep Dancing”, a stab at Dylan-esque lyrical obliquity and possibly more political activism on “The Way We Were”, and some swinging rock ‘n’ roll — “Baby Don’t Stop Crying”, which is probably the most listenable song here. He also covers Jimmy Ruffin’s “What Becomes of the Broken-Hearted” .