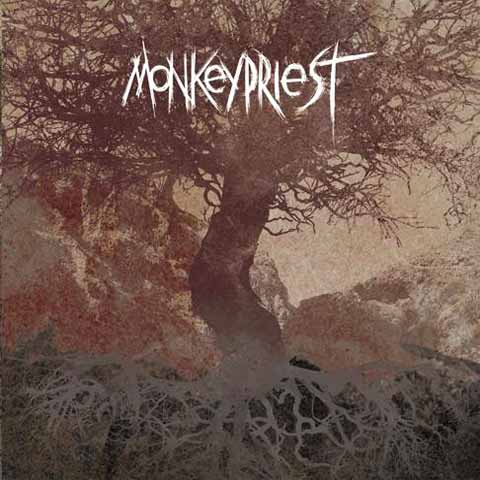 A band called Monkeypriest? Cheeky. It turns out that it’s a sludge/ doom trio from Spain, but with the name like this I would probably have given it a spin no matter what genre they were playing in. ‘Defending The Tree’ is crawling doom, characterized by rude, drawn out guitar chords over a bass rhythm that sounds like the slow buckling of a rockface under its own weight. After the pounding, riff-based intro ‘March of the monkey’, are three glowering sludgy epics that ascend to the level of terrifying before the twenty-five minutes is up. The snarling yelps of the vocals are a journey into the savage, territorial mind of a beast, over seething layers of snare and cymbals that hiss like gases escaping from mire. Both the title track and ‘War for the throne’ end with sudden, eruptive riffing that brings the just-controlled violence of each of these tracks spilling over into full-blown animalistic rage. Other more aggressive moments are the rumbling, hypnotic yet pummeling central riff of ‘War for the throne’, the EP’s undoubted centerpiece and masterstroke, and the boiling fury of the mid-paced closer ‘Doomsday.’ This last song accelerates at the four-minute mark with a punky Death Metal riff before closing with Dehumanizer-esque riffage and some decent chugs. Some say that the sound quality was somewhat lacking but this is clearly a matter of personal taste; the thick, foggy atmosphere created by the production all adds to the swampy feel of Monkeypriest’s music, and for my money it fits the bill. Overall, this is among the best, most ferocious sludge/ doom records of the year. Pity there’s only four tracks. I bet when you read ‘Monkeypriest’ you immediately thought of a chimpanzee, didn’t you? Chimpanzees don’t march. This monkey is a big ass baboon. His leathery face is impassive as he looks down on you, holding an ominous-looking banana. Get this or he’ll violate you with it. The name Sludgemonkey would also be good.

Track listing:
1. The March Of The Monkey
2. Defending The Tree
3. War For The Throne
4. Doomsday