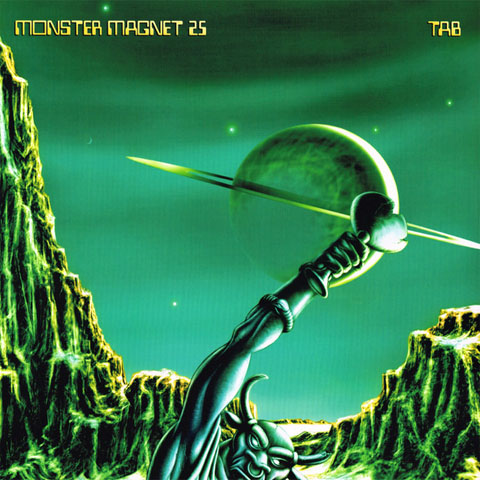 2017 re-issue with one bonus track

Originally released on Glitterhouse in Europe in 1991 but only seeing an American issue two years later as Caroline took advantage of the band’s newfound major-label status, Tab…25 for many remains the high point of Monster Magnet as extreme downer psych/space rock. For good reason as well, thanks to the over half-hour-long title track that takes up the bulk of the space on the disc. Finding a perfectly steady head-nodder of a groove that wouldn’t sound out of place at all on a Loop album, say, and with extremely strung-out guitar soloing madness to boot, “Tab…25” sounds exactly like the nightmarish orange-eye image on the back cover looks: weird, alien, and not quite in control of itself. Dave Wyndorf’s singing consists mostly of the occasional wordless wail and slurred vocal, often treated with as much delay and flanging as the guitars themselves, though his one spoken-word break, however slightly inaudible, provides a bit of a rock to cling to amid the slow-grind chaos. Even more feedback and noise gets added as it goes, and while for some listeners patience will be tested, as a massive epic it just can’t be beaten. Topping that is impossible, so wisely the group doesn’t try, but the other two cuts also do the business in their own ways. “Longhair” is 12 minutes long, but rather than stonily zoning out, the band’s rhythm section fires up and rips along, occasional breakdowns for breath aside, while the guitarists whip out some great, blunt playing that Hawkwind could be proud of. Wyndorf’s singing is distorted on the verses to sound like bubbling molten lava come to life, while the instrumental conclusion slows down just a touch to concentrate on more almighty riffs before one last explosion. The brief “Lord 13” is much calmer in comparison, though still shot through with a tribal electric psych intensity that’s worth hearing.