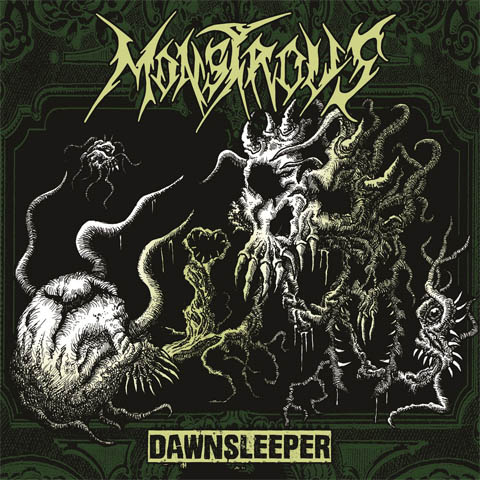 Monstrous was put together by death metal guru Rogga Johansson together with his equally hardworking friends Kjetil Lynghaug and Jon Rudin. The trio never gives up when it comes to bringing death metal to the masses and their debut album World Under Siege was released in 2019. A year later the band released the sophomore album Dawnsleeper. However there is a major difference between the two albums and its the fact that for this second release they added another vocalist, namely Wombbath singer Jonny Pettersson. A dual vocal work between Rogga and Jonny sounds like a wet dream for any fan of Swedish death metal. And it do work, as the two bounces off each other nicely, and gives the album its own sound. Dawnsleeper is fast and energetic death metal with melody that features two death metal singers having fun together. Worth checking out

Track list:
1. Dawnsleeper
2. At Night They Rise
3. Barricades Of Flesh And Fire
4. Rise Of the Malevolent
5. Full Body Target
6. The Crawling Abominations
7. Turrets Manned For Total War
8. The Power Of Rotting
9. Plagues Rage
10. Victims Of Tomorrow