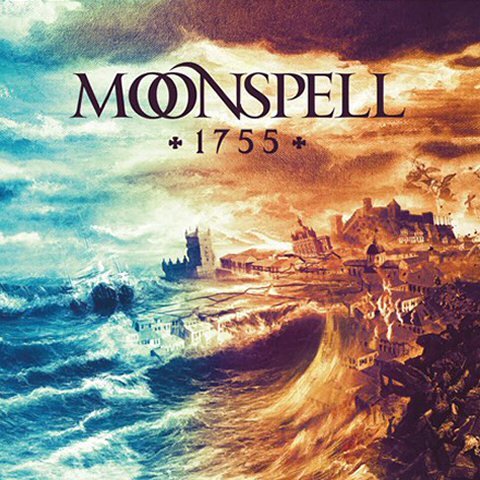 There are few bands who keep us on our toes quite like Portugal’s most successful heavy metal export. Moonspell have been making music for twenty-five years now and they are never the ones that repeat the same script twice. Their twelfth full-length album is entitled 1755 and its an album that sees founding father Fernando Ribeiro pushing his Moonspell once again onto an unexpected path. Will fans of this chameleon-like musical collective join them upon their latest voyage? Billed early on as a declarative examination of their Portuguese culture, 1755 is the band’s first album sung entirely in their native tongue. Seems fitting, considering Ribeiro and company are shedding light on Europe’s largest recorded earthquake, making that year one of wholesale apocalyptic change for the small coastal nation. If there is any band who can capture the beauty and hope of destruction and ruin, it is Moonspell. Where prior album Extinct revelled in goth rock undertones, substantial clean vocals, and catchy arrangements, 1755 is a harder beast to wrap one’s ears around. There is a grandiosity here, evident primarily from the majestic use and snazzy placement of choir vocals within the compositions. Fernando’s vicious vocals and the crunchy guitars are underpinned by layers of keyboard reminiscent of how Amorphis backs up their own songs of late. The whole thing builds up in tension until it crashes, not unlike the tsunami that blasted Lisbon after that 18th century quake. Moonspell caresses the song with their signature breaks, Miguel Gaspar’s drums adding a rolling Mediterranean flare which old fans will savour. For the most part, 1755 keeps the songs brief, even by Moonspell standards. This helps maintain maximum tension and intrigue. If a heavy metal album could carry a listener into the very crucible of calamity, it is 1755. We don’t have the goth, new wave, smoothness of Extinct or Irreligious, the heady experimentation of The Butterfly Effect, or the black metal trappings of Memorial and Alpha Noir. In a way, 1755 evokes the feeling of Under the Moonspell and Wolfheart, refracted through the kaleidoscope of songwriting wisdom steadily accrued. 1755 is about Portugal. Moonspell have travelled the world, no doubt inhaling its scents, its tragedies, and its passions in equal measure. As when they penned their first recordings, 1755 takes them home. I daresay their fan base will be on board with the album, steeped as it is in the caress of darkness this band has so carefully and artfully cultivated. There can be such value in doing exactly what you want when you want, artistically speaking, and Moonspell are proof of that.