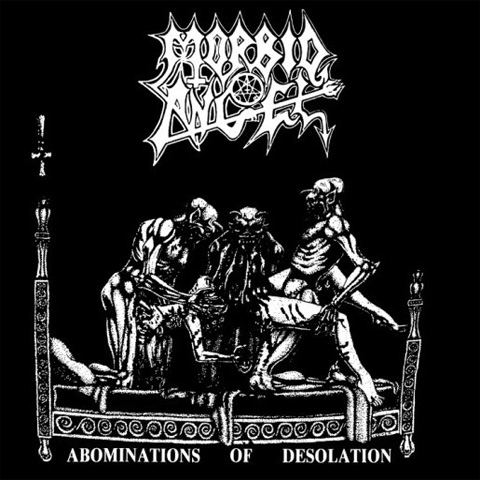 Mega rare 1991 Japan press on black vinyl. With SAT 666 matrix but without the numbered sticker

This is actually Morbid Angels self-financed debut, Abominations Of Desolation, with David Vincent producing. It was recorded in 1986 but not released due to the band’s dissatisfaction with the results. They finally released it through Earache after a series of bootlegs were produced. The most famous and now hardest to find was the one released on the Japanese label Satanic Records on glow in the dark vinyl, red vinyl, splatter vinyl, and black vinyl that’s all together are limited to 1000 copies. These Japanese editions now sells for an amazing $150-200 on auctions. Many thinks that Abominations Of Desolation is a demo recording but as it says it was intended to be their first full-length album, yet unreleased, making Altars Of Madness their proper debut. However, Trey Azagthoth has said in interviews that Abominations Of Desolation is not really an album and should be considered a demo. Most of the songs were reworked and appeared on later Morbid Angel albums. Chapel Of Ghouls, Lord Of All Fevers And Plague and Welcome To Hell’ (renamed Evil Spells) can be heard on Altars Of Madness. Unholy Blasphemies, Abominations and Azagthoth (renamed The Ancient Ones) are on Blessed Are The Sick. Angel Of Disease was recorded for Covenant, and lastly, Hell Spawn finally appeared on Formulas Fatal To The Flesh as Hellspawn: The Rebirth. To date Demon Seed is the only song from these sessions that has not been re-recorded for a full-length album.