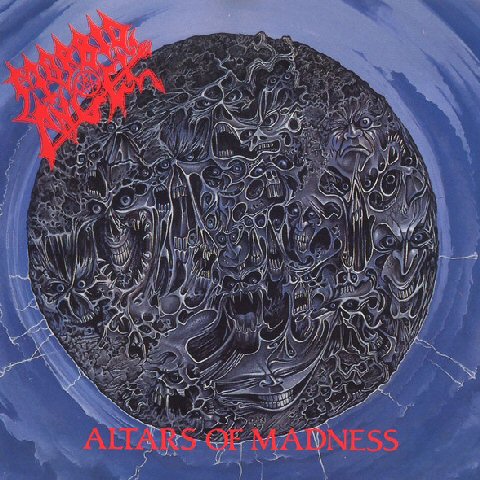 Few albums struck a chord within the ears and minds of the late-’80s underground metal scene like Morbid Angel’s Altars of Madness did at the end of the decade, setting a new precedent for metal bands to reach. With the arguable exception of Chuck Schuldiner’s Death, never before had a heavy metal band carried their lightning-fast guitar riffs and equally spellbinding guitar solos into such horrific territory. Venom and Slayer redefined the extent to which a metal band could align itself with all things evil during the beginning of the decade, but Morbid Angel made these two groups sound like children’s music compared to the Florida-based group’s assaulting death metal sounds and their blasphemous lyrics. Bassist David Vincent took inspiration from the developing grindcore scene in England and from fellow Floridian Shuldiner for his snarling vocals. And if Vincent’s monstrous vocals aren’t scary enough, the band’s musical onslaught will surely send children and parents running away in fear. Guitarists Trey Azagthoth and Richard Brunelle construct some ridiculously fast-paced riffs and lay down some jaw-dropping solos as if the music is being played in fast-forward mode; similarly, drummer Pete Sandoval challenges one’s perception of how fast a drummer can possibly drum. In the end, though, what made the group so influential to the burgeoning death metal scene of the ’90s was not so much the group’s groundbreaking template for death metal. Death had already set the precedent for the musical style on the group’s 1987 Scream Bloody Gore album but rather Vincent and Azagthoth’s near Satanic lyrics that seem far too sincere to be a pose. It wouldn’t be long before an entire new style of heavy metal called black metal would arise in Northern Europe in the early to mid-’90s around bands such as Emperor and Cradle of Filth, who initially took a large portion of their Satanic motifs from this album. Even though later Morbid Angel albums made this debut sound amateur in terms of sound quality and creativity, one cannot deny its influence.

Track listing:
1. Immortal Rites
2. Suffocation
3. Visions from the Darkside
4. Maze of Torment
5. Lord of All Fevers and Plague
6. Chapel of Ghouls
7. Bleed for the Devil
8. Damnation
9. Blasphemy
10. Evil Spells