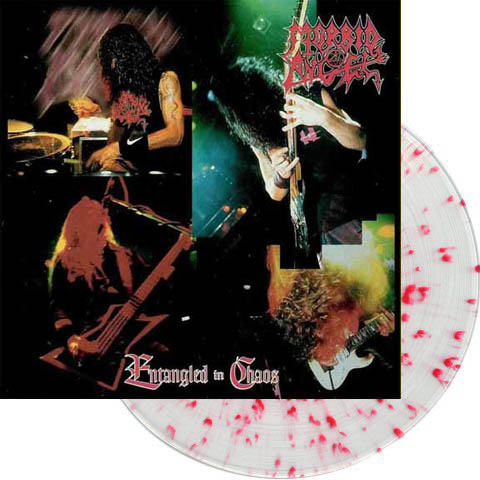 Drawing on material from their first four albums, Morbid Angel offered up an extremely well executed live album with “Entangled in Chaos”. Running just under forty minutes, fans of the band won’t find themselves bored in the least with the eleven tracks offered here. With four cuts from “Altars..”, and two cuts from “Blessed..”, the band’s earlier material is equally represented alongside their newer material at the time. Regardless of which era one prefers, the instrumentation is top notch and the sludgy sounding reproductions of classics like “Lord of All Fevers and Plagues” and “Immortal Rites” serve only to build on the originals. David Vincent’s vocals are occasionally buried under the guitars, yet they are wonderfully done. The drums aren’t hampered at all by the production, which was a problem for me with live albums from other bands.

Track listing:
1. Immortal Rites
2. Blasphemy Of The Holy Ghost
3. Sworn To The Black
4. Lord Of All Fevers And Plagues
5. Blessed Are The Sick
6. Day Of Suffering
7. Chapel Of Ghouls
8. Maze Of Torment
9. Rapture
10. Blood On My Hands
11. Dominate