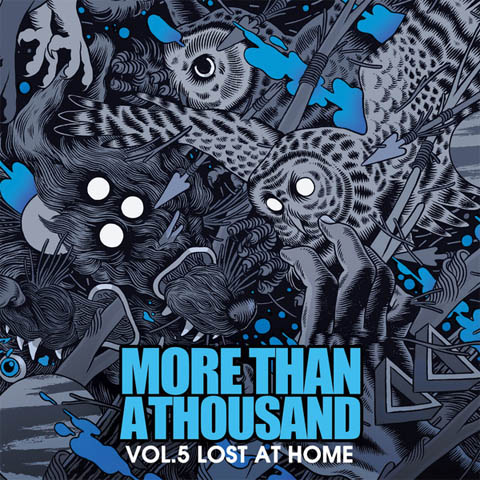 More Than A Thousand –Vol.5 Lost At Home cd

More Than a Thousand are a metalcore band formed in Portugal back in 2001. The band moved to London and were based their for about 4 years before moving back to their hometown. Their 2014 album, Vol. 5 Lost At Home Is More Than A Thousand, was the bands first album to be released in North America and their mix of grinding and alternative metal helped them become one of the most popular Portuguese bands in the socalled EMO explosion of the late 00s. But even more helpful was their attention-grabbing shows: the band’s performances are raw, dark and uptight, like an exploding hurricane. Add to that a lyrical preoccupation with darkness and human loss and you’ll find More Than A thousand’s motto. The band has played opening acts to major acts like Metallica, Mastodon, Papa Roach, Incubus amongst many others. The album Vol.5 – Lost At Home shows that this band is constantly growing. The right sound was done by well-known producer Henrik Udd (In Flames, Opeth, Bring Me The Horizon and many others) who mixed the songs at Studio Fredman / Sweden. The music is hard and heavy with a nice mix between harsh and clean voice. Might sound like any standard melodic metalcore in style but its done fantastically well. Expect breakdowns, brutal screams juxtaposed with clean vocal choruses, brain melting drum fills and skull splitting double bass.