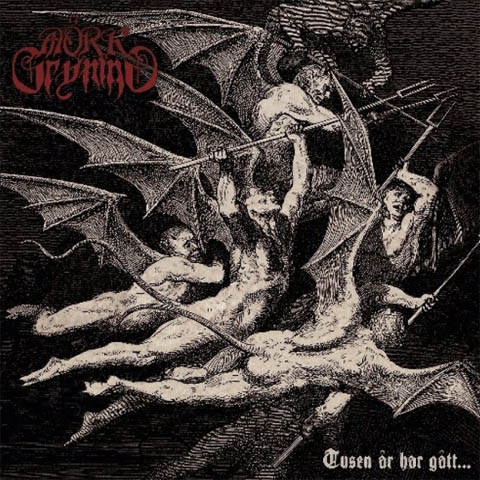 The debut album by this Stockholm, Sweden based black metal act. ‘Tusen Ar Har Gatt’ (‘One Thousand Years Have Passed’) were circulating a lot back in the time together with Dimmu Borgirs ‘Enthrone Darkness Triumphant’ and Dissections ‘Storm Of The Lights Bane’ and Mork Gryning are easily comparable with these two acts. The atmosphere comes from both of these bands, the melodic guitar-leads clearly sound like Dissection but I must also be fair to say that they have not copied anything, because both albums were conceived at roughly the same time. The impending doom is introduced by the dark and at the same time majestic intro ‘Dagon’, which seamlessly moves over into the opener ‘Journey’. This track is a piece of pure hate. For the first time the all-annihilating lead-axe is pushing to the fore, mercilessly it conjures a great melody into the furious riff-hurricane, which is made even mightier by the keyboards. Brutal thrashing combines with an enchanting atmosphere and thus creates catchiness. Also interesting is the alternating screaming of the two guys. The title-track ‘Tusen Ar Har Gatt’ also starts out with melodic leads, but here the drum-thunder gets even mightier and for the first time the bass is audible as well. The number offers a lot of variety as the band also includes some calmer parts. With ‘Omringningen’ the band then presents us with the perfect counterpart to Dissections ‘Night’s Blood’. This is one of the highlight of the album. Especially well implemented are the atmospheric keyboards and the just plainly great lead-axe, which blows away everything, great. Besides the mainly black metallic sounds we also get some very traditional metal-elements, this song alone would be enough for the Swedes to deserve more attention from the scene.