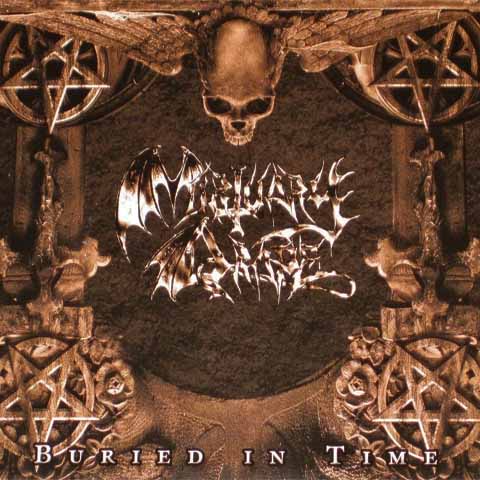 Alessandria, Italy occult black metal merchants Mortuary Drape debuted with the 1986 ‘Doom Return’ demo. A further effort ‘Necromancy’ followed three years later. The bands influences are often citing as far back as the 70’s but also some of the the early black metal bands are mentioned. Vocalist Wildness Perversion and bassist Old Necromancer have always been the pivotal members of Mortuary Drape with a constant ever flowing cast of side members. This their fourth album was released in 2004 and ‘Buried In Time’ is an apt title for an album which had been promised to rabid Drape fans since April 2003 but which in fact barely snuck through before the gates closed on 2004. But given their erratic history, two albums in five years is not a bad output, especially considering that vocalist Wildness Perversion is the sole survivor from the previous album, the 2000 occult classic, Tolling 13 Knell. The turnover in personnel has, unsurprisingly, led to significant stylistic change; most notably, the band is back down to a single bass-player and twin guitars, and the production is easily the heaviest and most professional the band has seen. The result is a much more thrash-oriented headbanger’s delight, and while this may initially disappoint those captivated by the eerie, dungeon-esque atmosphere of past works, it’s hard not to get caught up in the sublime energy of this riff orgy. Tracks like ‘Deep Void’ and ‘Animism’ display the band’s talent for riff sequencing, with slower melodic sections melting perfectly into adrenalin-charged finales. The band offers some respite from the one-hour deluge of shredding guitars with an almost jungle-like instrumental and some sombre intros and bridges towards the latter half of the album, which serve as a throwback to earlier Drape recordings. But don’t fool yourself: while retaining a keen sense of melody, Buried in Time is a full-on blackened thrash assault that is likely to incite dangerous driving and piss the neighbours right off. Consider yourself warned.