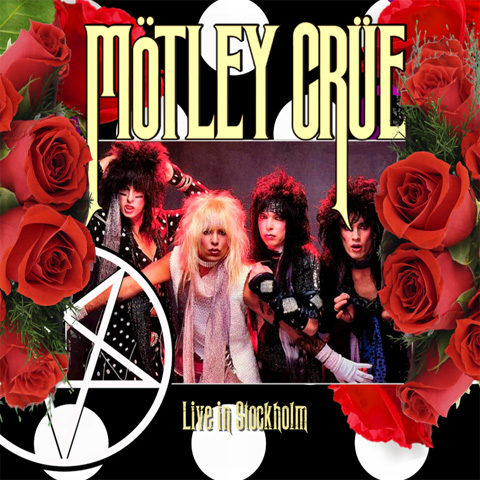 Motley Crue made their debut on Swedish soil at the Monsters Of Rock Festival in Stockholm back in 1984 and later that winter they were opening up for Iron Maiden on their Swedish dates. In 1986 they returned once again on their Theatre Of Pain Tour. This time the band played three shows, Stockholm, Gothenburg and Lund. This double album was taped at the first of those dates, namely the one at Johanneshov Issstadion on the 21st of February 1986. This show took place a friday evening and the band had no problem to attrac their audience. Their new glam style had been well received and rumours about Tommy Lee’s crazy drum riser, where he performed his solo in an angle of 90 degrees, were also things that no hardrock kid wanted to miss out on. However the image and gimmicks should be seen as a bonus as it was the music that matters the most. Theatre Of Pain was a good seller and the band performed several tracks from their new album like Use It Or Lose It, Fight For Your Rights, Keep Your Eye On The Money, Louder Than Hell and Smokin In The Boys Room and as the album hasnt aged that well, these are now all tracks that rarely makes it onto the set list and makes this album extra special. Most exclusive track on the album is the City Boy Blues as it was only performed in Stockholm during the 3 Swedish dates and hasnt been played live since then. The band then finished their set with two covers, their brilliant version of Beatles Helter Skelter and the less brilliant version of Elvis Presley’s Jailhouse Rock.