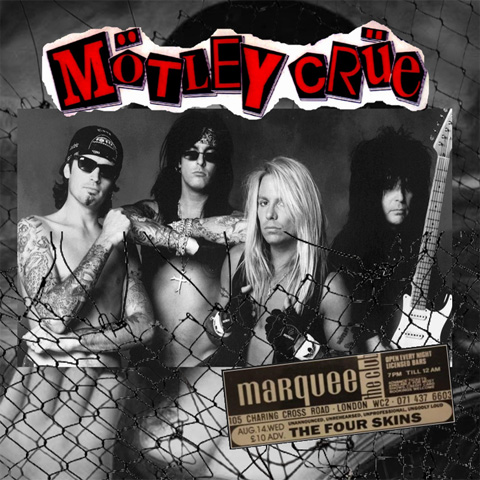 Motley Crue were booked for the 1991 European Monsters Of Rock Tour that ran for 8 dates through August and September that year. The band hadnt played together since the Dr Feelgood Tour ended in Arizon a year earlier, except for a performance at the MTV Video Music Award in September of 1990. To get back on track for these 8 dates the band set up a secret warm-up gig at the Marquee Club in London, on the 14th of August, under the pseudonym of The Foreskins. The British press however misspelled the name and advertised the the band as The Four Skins, which made some punters think is was a reunion gig of the defunct English skinhead punk act by that name. This secret show are included on this album and it was this show that lead up to the bands second Donnington Monsters Of Rock Festival appearance. This was only Mötley Crües second club gig in ten years and the album proves how well the band can do anything from clubs to stadiums to huge outdoor festivals. Motley Crue at a small stage works very well. The record label saw this mini tour as a good chance to release a best of compilation album so the Decade Of Decadence was released in September that year. Two tracks from that album Primal Scream and the Sex Pistols anthem Anarchy In The .U.K. were performed at those UK dates so that means that these two tracks are performed live for the first time ever on this recording. The raw and heavy Primal Scream version is one of the better versions of this track.