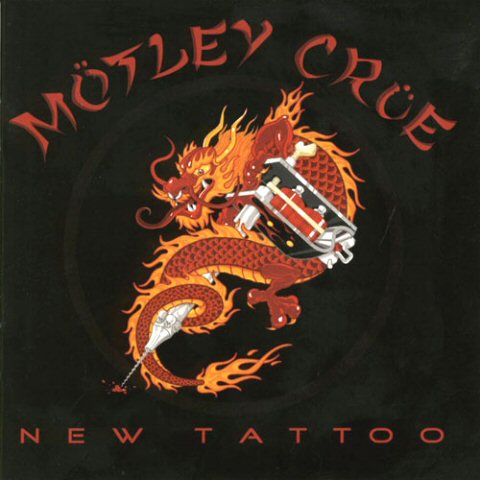 Forget the stylistic dabbling and forced attempts to fit the ’90s rock market that plagued Motley Crue throughout the decade. ‘New Tattoo’ is a full-fledged return to their trademark sound: sleazy hard rock with a slight glam tinge (although not quite as much as before). And it’s really sleazy, the band apparently having decided to return to their bread and butter with a vengeance. In spite of a couple of sentimental ballads, odes to prostitutes, S&M, erotic-cabaret stars, glue-sniffing trailer-park teenage girls, and even a corny nod to Internet porn dominate the record. It seems like a conscious determination on the band’s part to outdo themselves in the lewdness department, perhaps because they’ve realized that making concessions to ’90s trends isn’t really their forte, or perhaps as a pointed reaction against the lack of hedonism in the vast majority of ’90s rock. There’s more than a hint of bitterness about all of that on ‘1st Band on the Moon’ and ‘Fake’, the former is more playful, lamenting the disappearance of party-hearty arena rock and horny groupies, while the latter is an angry, unfocused rant against greedy record-industry hypocrites (ironically, ‘Fake’ seems dissatisfied with the rock and roll lifestyle the band spends the rest of the album singing about). The songwriting is occasionally somewhat lackluster, but never as erratic as ‘Generation Swine’, and even if there aren’t any classic singles here on the level of the band’s best work in the ’80s, the material overall is pretty consistently melodic. By this point, anyone who still follows Motley Crue is likely to be a rabid diehard, and that fan base will be ecstatic over ‘New Tattoo’.