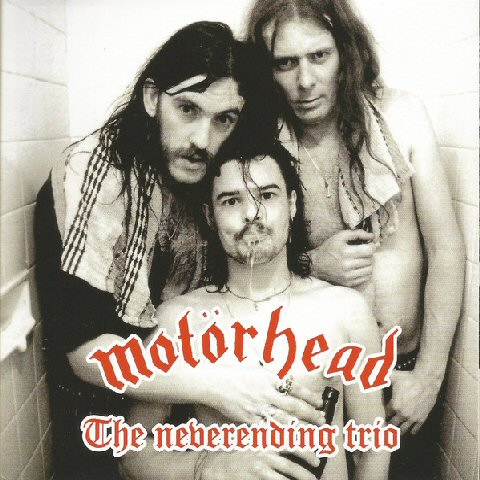 Motorhead have released something like 22 studio records and a fair share of live records in their staggering 40 year existence as a working unit, which ended with the passing of Lemmy Kilmister. The band also went through several line up changes over the course of time, perhaps the most beloved version of Motorhead was the trio of Lemmy, guitarist Fast Eddie Clarke, and maniac drummer Phil “Philthy Animal” Taylor. They would produce some of the most icon metal music ever created in a short period of time, Overkill, Bomber, Ace Of Spades, and live opus No Sleep Till Hammersmith, these records are cornerstones of the genre of metal, forging of sound of aggressive Rock and Roll with a bit of punk thrown in. Lemmy would, at some point, say he wanted to be “fast and viscous, like the MC5”. They succeeded. The classic Trio would only last six years with the majority of the musical output coming from 1979 to 1982, by then the writing was on the wall. The rather lackluster Iron Fist record shows cracks in the group, drugs and alcohol where certainly part of it, and during the American tour to support the record, Clarke left the band mid tour. A frantic search to find someone to fill in, they find Brian “Robo” Robertson, formerly of Thin Lizzy fame who was available…and willing. The tour continues and he fits in well, so well he joins the band and would record the under rated Another Perfect Day album before making his own exit. Alright, let’s get to the music. The bulk of this release is actually recorded with the Lemmy, Robertson, Taylor line up at the tale end of the Iron Fist tour at the Volkshaus in Zurich, Switzerland, the date was November 12, 1982. Iron Fist is the opener, brilliant song and one of a handful of the said album that one could throw in the classic category, it has a swagger fuelled by the thunderous drumming of Animal. Robertson’s use of a wah pedal makes for some great playing and the band keep it loose, like all great Motorhead is. In keeping with the record, they hammer into Heart Of Stone and again, just blistering. Lemmy introduces their “new Russian Jewish guitar player” and they play Turn You Round Again, obvious the line up was gelling a bit and music was being written. Curiously the song would only appear as a b-side to the I Got Mine single in 1983. Lemmy is in a funny mood, he introduces Shoot You In The Back as Back You Down To Shoot and Iron Horse as Iron Donkey. The band revives Nadine, the old Chuck Berry tune, and dedicates it to the opening band Killer. It is well documented that Lemmy loved early Rock and Roll and this is his raw homage, this song was played during the latter European tour only and the only official release of the song by the band is on the Stone Deaf Forever box set, a live version from a few days after this concert. Lemmy is giving Robo crap already, telling the audience not only does he play like Eddie, he looks like him too! More shenanigans. I Got Mine follows, you can hear the Thin Lizzy influence on this song, more of a traditional song versus the flat out speed of their earlier material. Robo shines on Hoochie Coochie Man, he plays a heavy as hell riff before they settle down to play the blues, the band can stretch out a bit and the loose structure works well in the live setting. The recording ends with (I Don’t Need) Religion from the Iron Fist record, certainly missing are probably Capricorn, We Are The Road Crew, The Chase Is Better Than The Catch, Overkill, and Motorhead. There are a couple bonus tracks from the classic line up of Clarke, Taylor, and Kilmister, the Neverending Trio. Taken from an FM broadcast there are two songs, a scant seven minutes on musical brilliance from the band’s performance at Holland’s Lochem Festival on May 15, 1980. The sound is excellent, again well balanced everything is clearly heard with Clarke’s guitar being just a tad low in the mix. I’m a big fan of Capricorn, certainly a song that would have worked in Hawkwind as it has an almost psychedelic feel to it, lots to enjoy especially Lemmy’s bass playing! Hold on to your seat, the last song is their Take on the old chestnut The Train Kept’ A Rollin’, played non stop with Capricorn this is a balls out ripping version. Fast, furious, and very loose this sums up what Motorhead is in a short two and half minutes.