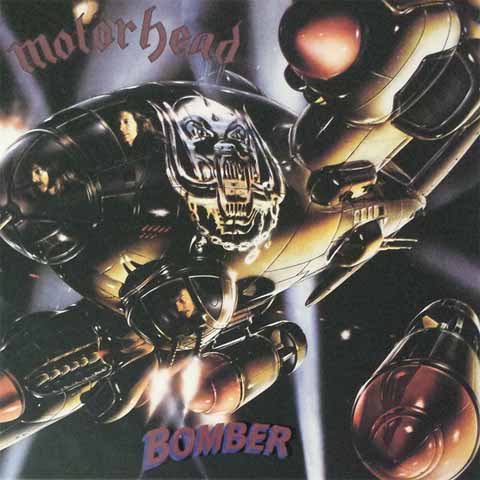 Recorded in late summer 1979 and released by the end of the year, Bomber quickly followed up Overkill, Motörhead’s landmark breakthrough album from earlier in the year. Bomber bears a lot in common with its fan-favorite predecessor. For starters, it features the classic Motörhead lineup: Lemmy (bass and vocals), “Fast” Eddie Clarke (guitar), and “Philthy Animal” Taylor (drums). Also like Overkill, Bomber features the production grace of Jimmy Miller, the man responsible for the Rolling Stones’ late-’60s/early-’70s albums, including such masterpieces as Beggars Banquet, Sticky Fingers, and Exile on Main St. And the music here on Bomber explodes on song after song, thanks to the crazed performances of the aforementioned bandmembers as well as the well-overdriven, ear-rattling production perfection of Miller. Actually, there’s only one marked difference between Overkill and Bomber that’s worth noting: the songs. There are a couple killers here, namely “Dead Men Tell No Tales,” “Stone Dead Forever,” and “Bomber,” but overall, the songs of Bomber aren’t as strong as those of Overkill were. Granted, this is somewhat of a moot point to raise, as Bomber is still a top-shelf Motörhead album, one of their all-time best, without question. But it does fall just a notch or two below Overkill and Ace of Spades, the latter of which would follow a year later and catapult the band to further acclaim. Bomber kicks ass, in any event, and its best moments are as superlative as any Motörhead would ever record. The band was really on fire during this point in time and could seemingly do no wrong.