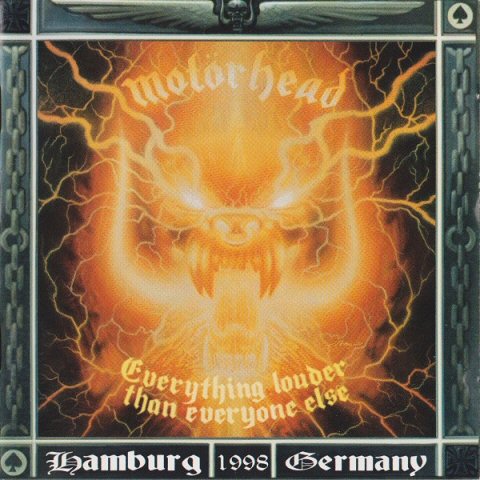 Motorhead -Everything Louder Than Everyone Else 3lp

“We are Motörhead, and we’re gonna kick your ass,” bellows the inimitable Lemmy Kilmister at the beginning of this relentless live performance, and he means it. Everything Louder Than Everyone Else, taken from a gig in Hamburg, Germany, circa 1998, is all its title promises to be and more. Mixed unbelievably loud and in-your-face, it captures Motörhead’s overwhelming live power in all its toothy glory and reflects a veteran band working at the peak of its skill. While much nostalgic mythologizing is made of Motörhead’s classic early lineup (featuring Lemmy, “Fast” Eddie Clarke, and “Philthy Animal” Taylor), the fact is, the group has soldiered on since that incarnation and has gotten better along the way. This double-disc set focuses mainly on Motörhead’s ’90s output, which is astoundingly strong (much better than the band’s spotty work in the ’80s). One glance at the track listing proves that the group is far from resting on past glories; only a handful of songs from the band’s early years — like “Capricorn” and “Metropolis” — appear. Instead, blistering versions of latter-day classics like “Burner,” “I’m So Bad, Baby I Don’t Care,” and “Love for Sale” make up the bulk of this devastating set. Fans who were disappointed by Motörhead’s last official live album, the flat-sounding No Sleep at All (which was virtually disowned by the band), will be overjoyed with the uncompromised intensity of this album’s ferocious production. Additionally, Motörhead’s lineup — featuring the fast hands and feet of drummer Mikkey Dee and the pile-driving guitars of Phil Campbell — has been intact for longer than any other version of Motörhead, and the group’s cohesion and enthusiasm is more than evident here. What’s perhaps most amazing of all is that Lemmy’s voice hasn’t lost any of its jet-engine roar after many years’ worth of use and abuse. Great liner notes, including song-by-song comments by Lem himself, along with testimony by fans ranging from Joey Ramone to Tom Arnold, make this record even more entertaining and essential. No Motörhead-banger should be without.