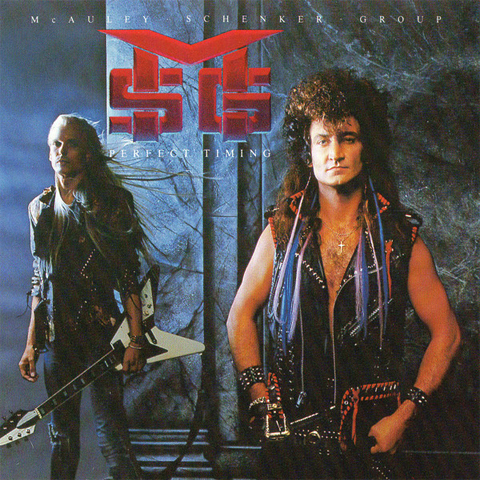 After making his debut at a mere 17 years of age on the Scorpions first album in 1972, mad axe-man and guitar maestro Michael Schenker spent five years as lead guitarist with Brit rockers UFO, before forming the Michael Schenker Group (MSG for short) with singer Gary Barden in 1979. After four studio albums and two live records, released on Chrysalis between 1980 and 1984, Michael returned in 1987 for the “Perfect Timing” album, but now fronted by former Grand Prix and Far Corporation singer Robin McAuley, with a change of name to the McAuley Schenker Group, but still conveniently shortened to MSG. The new look MSG recorded a total of four albums, starting with the melodic “Perfect Timing” (1987), “Save Yourself” (1989), “M.S.G.” (1992) and finally with “Unplugged – Live” (1992). ‘Perfect Timing’ from 1987 features three singles; ‘Love Is Not A Game’, ‘Follow The Night’ and the US Hot 100 Hit ‘Gimme Your Love’. Of the album Schenker did with singer Robin McAuley I truly believe that ‘Perfect Timing’ is the best of the three. Its slick, polished hair/glam rock that leaned more to the commercial side of hard rock. Schenker and his trademark black and white Gibson Flying-V guitar is in top form – as ALL the songs here are solid. Highlights include the two hits “Love Is Not A Game” (perhaps Schenker’s best tune with McAuley on vocals) and “Gimme Your Love”; the rockers “Here Today – Gone Tomorrow”, “I Don’t Wanna Lose”, and “No Time For Losers”; and two typical 80’s style power ballads in “Follow The Night” and “Time”.