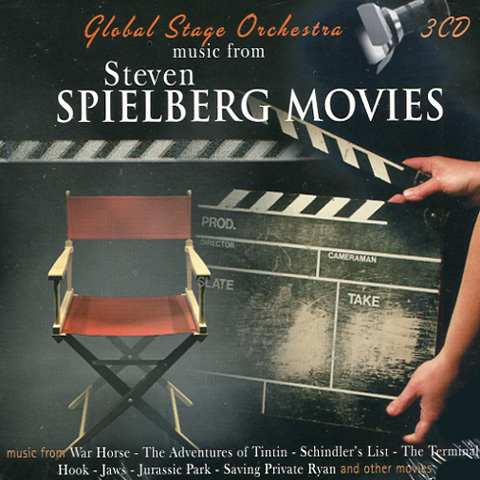 One of the bigest directors in the world must be Steven Spielberg. I think most people have atleast one Spielberg movie they adore, be it Schindlers List or Indiana Jones or why not Jaws, Jurassic Park or E.T the list of blockbuster movies that this man has created is a long and successful one. This triple disc set features the Global Stage Orchestra performing the scores to many of his most famous movies on two of the cds while the third cd includes songs by other artists that has been included in a Spielberg movie. The Global Stage Orchestra versions which is far from any orchestral versions that the name might suggest. Instead they have tried to be creative and performs the music on synthesizers. Its still very similar to the original music but not just as great in my opinion. However there are 50 tracks on here and the cd sells for a bargain price. So buy and judge for yourself

Track list:
1. The Auction from War Horse
2. Seeding and Horse Vs. Car from War Horse
3. Joey’s New Friends from War Horse
4. The Death of Topthorn from War Horse
5. The Reunion from War Horse
6. Remembering Emilie and Finale from War Horse
7. The Adventure Continues from the Adventures of Tintin
8. The Captain’s Counsel from the Adventures of Tintin
9. The Secret of the Scrolls from the Adventures of Tintin
10. The Milanese Nightingale from the Adventures of Tintin
11. Capturing Mr. Silk from the Adventures of Tintin
12. Captain Haddock Takes the Oars from the Adventures of Tintin
13. End Credits from Munich
14. The Tale of Viktor Navorski from the Terminal
15. Catch Me If You Can from Catch Me If You Can
16. The Mecha World from A.I. – Artifical Intelligence
17. Hymn to the Fallen from Saving Private Ryan
18. Theme from Schindler’s List from Schindler’s List
19. Theme from Jurassic Park from Jurassic Park
20. Flight to Neverland from Hook
21. The Keeper of the Grail from Indiana Jones and the Last Crusade
22. Nocturnal Activities from Indiana Jones and the Temple of Doom
23. Main Theme from E.T. – the Extra-Terrestrial
24. Raiders of the Lost Ark from Raiders of the Lost Ark
25. Main Theme from Close Encounters of the Third Kind
26. Theme from Jaws from Jaws
27. Symphony No. 8 Unfinished: Allegro Moderato from Minority Report
28. Johnny Mantis -Chances Are from Close Encounters of the Third Kind
29. Slim Whitman -Love Song of the Waterfall from Close Encounters of the Third Kind
30. The Everly Brother -Wake Up Little Susie from Indiana Jones and the Kingdom of the Crystal Skull
31. Bobby Day -Little Bitty Pretty One from Indiana J. And the Kingdom of the Crystal Skull
32. Coleman Hawkins -Body and Soul from the Color Purple
33. Louis Armstrong -My Heart (Will Always Lead Me Back to You) from the Color Purple
34. Billlie Holiday -Solitude from Minority Report
35. Stan Getz -Prelude to a Kiss from Munich
36. Melina Mercouri -Never on Sunday from Munich
37. Benny Goodman -You’re a Sweet Little Headache from Indiana Jones and the Last
38. The Andrews Sister -Daddy from 1941
39. The Platters -Smoke Gets in Your Eyes from Always
40. The Coasters -Yakety Yak from Always
41. Edit Piaf -Tu Es Partout from Saving Private Ryan
42. Al Bowlly -South of the Border from Empire of the Sun
43. Jack Hylton -Swing Is in the Air from Empire of the Sun
44. Benny Golson -Something in B Flat from the Terminal
45. The Lettermen -The Way You Look Tonight from Catch Me If You Can
46. Judy Garland -Embraceable You from Catch Me If You Can
47. Stubby Kaye and Johnny Silver -Guys and Dolls from A.I. – Artifical Intelligence
48. Dick Powell -I Only Have Eyes for You from A.I. – Artifical Intelligence
49. Mimi Thoma -Mamatschi from Schindler’s List
50. Wilhelm Strienz -Gute Nacht Mutter from Schindler’s List