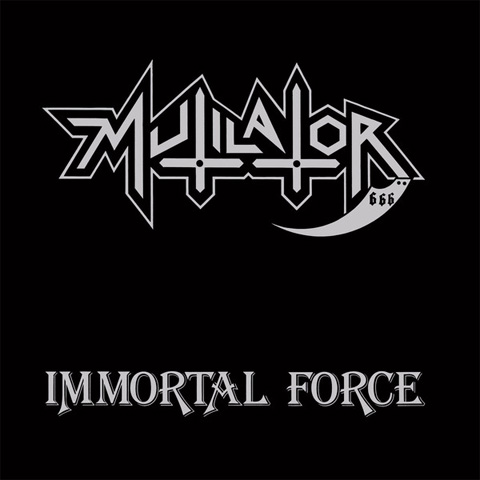 2016 us re-issue with lyric insert and poster

Mutilator’s debut album, Immortal Force, provides an excellent case study in D.I.Y. ethics and the desire to succeed against all odds. No doubt recorded on less than a shoestring, the album’s sound is decidedly thin, the band’s playing accomplished but generally uninventive, their English deplorable, but the sum of all their parts is pretty damn entertaining. Aside from their obvious similarities to Brazilian contemporaries (Sarcofago, Sepultura, Vulcano, etc.), Mutilator’s deathly thrashers (see “Blood Storm,” “Butcher,” “Immortal Force”) most closely resemble early Kreator: vicious, crude, rather atonal, poorly recorded, but technically very well performed. Additional echoes of thrash titans Anthrax (“Brigade of Hate”), Slayer (“Tormented Soul,”), and, of course, Metallica (“Mutilator”) crop up throughout, marking Immortal Force an album not entirely devoid of imagination, but also far from stylistically groundbreaking. Still, when held up against its improbable origins, many of its deficiencies can’t help but be ignored, and may well explain the album’s enduring appeal in the eyes of serious metal collectors.