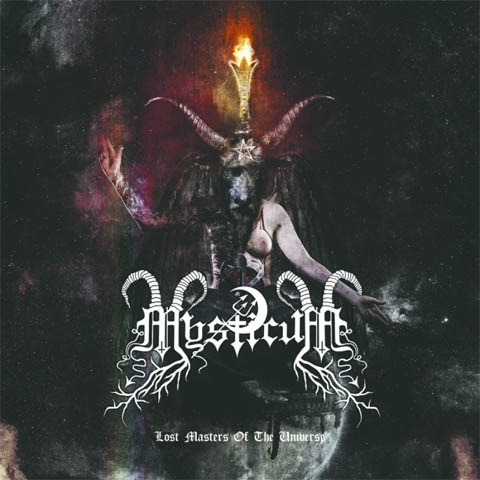 2013 re-issue in slipcase with a slightly different cover artwork and different track listing from the original 2004 Planet Satan Revolution release.

Norwegian industrial black metal act Mysticum began life as a trio under the name Sabazios and released two demos. The two demos led to an agreement with Euronymous and his record label Deathlike Silence and prior to recording of the scheduled album the name change to Mysticum ensued. The band’s plans were thrown into disarray with the murder of Euronymous. It would take another year before any official release was made and that was a split single with Ulver (a band that Robin Mean Malmberg were involved with at the same time). Their first album was released in 1995 and they recorded a second album Planet Satan the year after but that was never released. One of the tracks from the unreleased second album was released as a split single. In 1998 the band contributed two tracks to tribute albums. In 2004 this private self financed compilation cd was released. If you cant find the original demos then this is really a Mysticum CD you need. This was one of black metal’s most unique bands and its a shame that they went by almost entirely unnoticed. My guess is that it all had been different if their debut album had been released before the tragic death of Euronymous. Maybe they had have the same cult status as many of their Norwegian colleagues