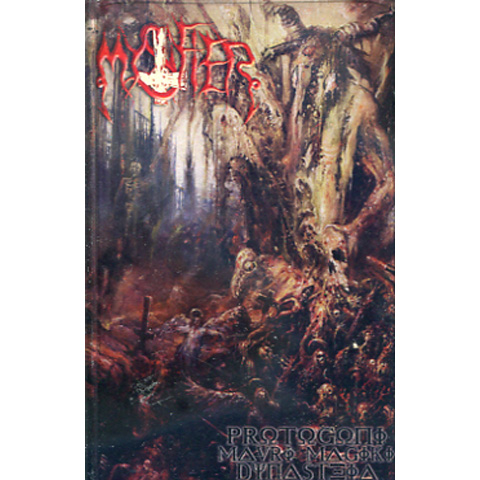 Brazil’s bestial barbarians Mystifier have been unwavering in the endless pursuit and exploration of extreme metal darkness for 30 years. Whether it’s interesting or trivial depends on who you ask, but the act is arguably best known for its inclusion on the metalcentric soundtrack of Harmony Korine’s ragtag-celebrating cult classic film Gummo. Anecdotal bullet points aside, the South American noise merchants helped establish the continent on the global heavy metal scene—along with the likes of their countrymen in Sarcofago and Sepultura, and Peru’s Mortem—with their blackened death metal madness years before churches were burning and blood was spilling in Norway. Their fifth album, Protogoni Mavri Magiki Dynasteia, was released in 2019. An album that really feels like its the best album the band really is capable of releasing three decades into its career. A notable who’s who of black metal peppers the album in terms of guest appearances, including Jim Mutilator (ex-Rotting Christ and ex-Varathron) on the title track and ABSU’s Proscriptor McGovern who crafted the intro for “Witching Lycanthropic Moon”. But the band’s leader is most deserving of acknowledgement. Flanked by relative newcomers Diego Do’Urden (bass, keyboards, vocals) and Eduardo “Warmonger” Amorim (drums), guitarist Beelzeebubth is Mystifier’s sole original member. Sure, maintaining a stable line-up hasn’t been Beelzeebubth’s forte, but an unyielding determination to continually march and wave the flag of dark metal glory most certainly has been.