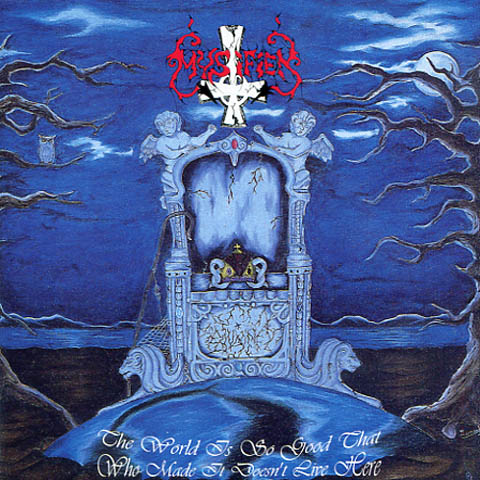 This is the since long out of print original pressing on Osmose records. It was re-released in 2005 but this is the real deal. Get it now before its to late

From listening to Mystifier’s corrosive, hyper-speed, symphonic-tinged black metal, you’d never guess that they hailed from the very tropical, richly historical seaside city of Salvador, Brazil. Their third album cleverly titled, ‘The World Is So Good That Who Made It Doesn’t Live Here’ has somehow split the Mystifier fans into two camps. This album showed a lot if improvement from their earlier works, and they incorporated more of a cleaner chanting/shouting voice and small doses of keyboards. Some say that they lost it all while other say that the new sound is a real treat and that the band never had sounded better. Whatever youre opinion is Mystifier will always remain Mystifier and the band is still excruciatingly heavy and blasphemous in most places. Mystifier is an unique and exciting black death metal act with brutal and gutteral thrashings combining with eerie and magical doom passages and it’s a band that is highly recommended to anyone who likes both rabid death metal and eerie musical ritualism.

Track listing:
1. Give The Human Devil His Due
2. A Chant To The Goddess Of Love – Venus
3. The Death Of An Immortal (According To The Astral Light)
4. Idolatry
5. The Barbarian Duelling With The Wise
6. Moonick (Why Does It Never Rain On The Moon)