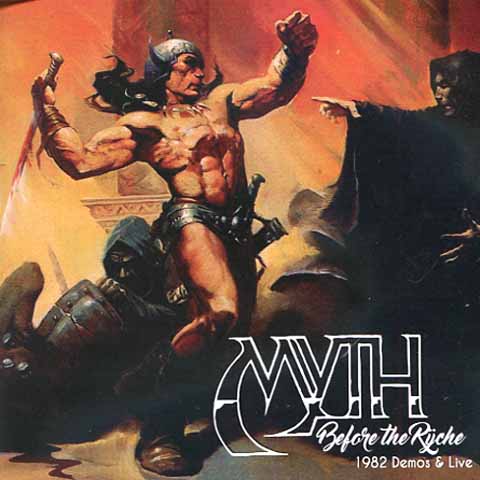 Myth –Before The Ryche cd

Cover band The Mob was looking for a singer for a gig at a local rock festival and they asked Geoff Tate to join them. Tate did a couple of shows with them but were not that interested in performing covers instead he joined the progressive metal act Myth, other band members of Myth included Kelly Gray, who was later one of the replacements for Queensrÿche guitarist Chris DeGarmo, and Randy Gane, both of whom joined Tate’s version of Queensrÿche in 2012. Myth recorded some demo songs and performed a couple of live shows with Tate. Then Tate got the call again from The Mob, this time The Mob needed a singer to record their demo. Tate accepted after convincing his pals in Myth that getting some professional recording experience would benefit all of them in the future. Meanwhile, The Mob already had a set of songs, but one song was still left without lyrics. Tate was asked to write lyrics to this song, which would become the song The Lady Wore Black, Tate’s first penned song with the band. The demo tape was widely circulated, and was released as an EP in 1982 on the 206 Records label. Around this time, the name The Mob was changed to Queensrÿche, and Tate left Myth to become Queensrÿche’s permanent lead singer. Myth went on to record the album Arabia after Tate had left, the Arabia album however was only made in a handful of testpressings and never released commercial. The only released song with Myth is Let Me Hear The Thunder that ended up on the 1985 compilation album Pacific Metal Project. On this album you’ll find the rare Myth demos with Geoff Tate on vocals as well as some live tracks from the same period.