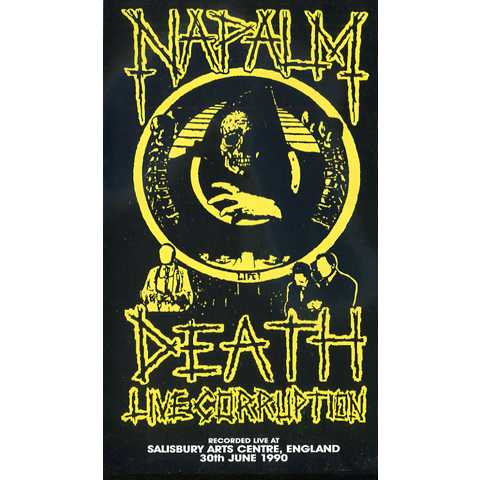 This is vintage Napalm Death at their absolute finest. This was recorded at Salisbury Arts Centre on the 30th of June 1990. What an intense and insane musical noise terror this is. Barney on vocals coming from Benediction, Shane on bass from Unseen Terror, Jesse via Terrorizor, Mick Harris (who discovered Napalm Death in 1985 at a local pub) and Mitch Harris from Righteous Pigs. The band plays 20+ songs on this monumental live concoction. It is really entertaining and well played out the whole way through. Intensity and love for the extreme music, Napalm Death just kills here. What’s played on here i.e. ‘Live Corruption’ is a combination of songs from ‘Scum’, ‘From Enslavement To Obliteration’, ‘The Peel Sessions’ and ‘Harmony Corruption.’ These guys knew how to give an awesome show back then and I think they still put on a good live show even though Jesse died and Mick is gone. Again the music here is just brutal with riffs that are blazingly fast. Mick played a role in getting them to play at their peak with their intensity. Simply amazing. His blast beating has become an interest and influence on newer death/grind bands like Nausea, et al. He really had that super intensity that was unequivocal. “Barney” is totally “chuffed” in terms of dishing out the death metal style of vocals. Amazing that the whole band came together and just annihilated the spectators. This whole output is simply extreme noise terror. Lovely