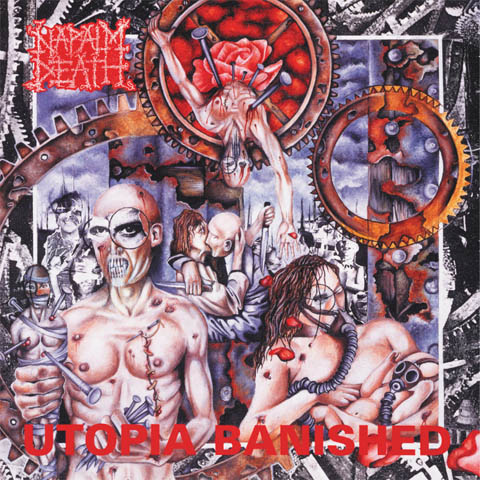 Napalm Death’s evolution continues with Utopia Banished, another change of direction for the band. Here Napalm Death stylistically veer somewhere between the grindcore noise assaults of their early, seminal albums (Scum [1987], From Enslavement to Obliteration [1988]) and the straightforward death metal of their more recent releases (Harmony Corruption [1990], Mass Appeal Madness [1991]). However, they also incorporate quite a bit of experimentalism into the synthesis, resulting in a curious album that doesn’t fall into any preconceived category (if you need a tag, consider it an expansive death metal approach to savage grindcore aesthetics). Napalm Death thus go back to their roots in a way. Few of the songs top three minutes, and they often break into frenzied breaks of whirlwind blasting (highlighting new drummer Danny Herrera). Then again, Colin Richardson gives the songs a lustrous production sheen, and the band crafts elaborate songs that twist and turn from section to section. So, if Napalm Death do indeed go back to their roots here (i.e., Scum, Enslavement), they do so while retaining the professional production and full-fledged songwriting that had characterized their recent foray into death metal (Harmony Corruption). It’s really the best of both worlds, except that there aren’t too many noteworthy songs here. “I Abstain” and “The World Keeps Turning” stand out, but many of the others are generally interchangeable — there’s just nothing that fascinating about them beyond their actual sound. Yes, they’re powerful, but no, they’re not especially great songs. The greatest song here, in fact, is an anomaly: “Contemptuous.” It closes the album, sounds quite digitally processed, and lumbers along at a slow, marching pace (think Godflesh circa Streetcleaner). It’s a stunning finale and makes you wish Napalm Death had recorded a few more similar songs for Utopia Banished. Regardless, the album is a step in the right direction for the band after the straightforwardness of Harmony Corruption. Here they’ve found an interesting style to explore, a synthesis of their grindcore past and their death metal present that they’d soon refine on subsequent albums, to much success. Consider Utopia Banished, like Harmony Corruption before it, to be a passingly engaging transition toward the fruitful harvest that is Fear Emptiness Despair

Track listing:
1. Discordance
2. I Abstain
3. Dementia Access
4. Christening Of The Blind
5. The World Keeps Turning
6. Idiosyncratic
7. Araynisms
8. Cause And Effect
9. Judicial Slime
10. Distorting The Medium
11. Got Time To Kill
12. Upward And Uninterested
13. Exile
14. Awake To A Life Of Misery
15. Contemptuous
16. One And The Same
17. Sick And Tired
18. Malignant Trait
19. Killing With Kindness