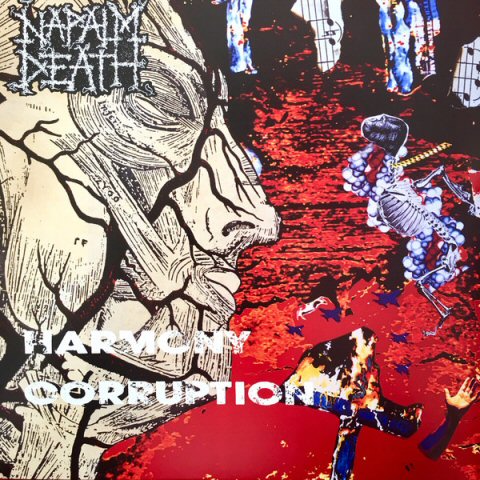 During the two-year interim separating Harmony Corruption from Napalm Deaths previous album, the band totally revamped its line-up and its sound as well, moving toward the more expansive horizons of standard death metal. This move inspired quite a bit of debate among fans. Napalm Death had been — and will always be — the definitive grindcore band, as exemplified by Scum (1987) and From Enslavement to Obliteration (1988), the two albums that practically alone defined an entire new style of extreme metal. However, the Napalm Death of those two albums is not the Napalm Death of Harmony Corruption, not in membership nor sound. The band’s vocalist, Lee Dorian, split (to join Cathedral), as did guitarist Bill Steer (Carcass), leaving only the band’s rhythm section: bassist Shane Embury and drummer Mick Harris. Barney Greenway (formerly of Benediction) takes over for Dorian, while both Jesse Pintado (Terrorizer) and Mitch Harris (Righteous Pigs) take over for Steer. The addition of Pintado and Harris particularly opened up a new realm of possibilities for Napalm Death, and the band indeed stretches out musically. Whereas the sound of Scum and Enslavement had been characterized by one- or two-minute grindcore blasts, the sound of Harmony Corruption is more expansive. The songs range from two minutes to over five, and Pintado and Harris often interweave their guitar playing into a dense, dizzying wall of sound that never quite relents until the album reaches its final conclusion. The guitar playing is varied and intricate here; you can hear the distinction between Pintado and Harris as they bob and weave around one another. This is much different from Steer’s playing, which had been essentially a frenzied, distorted blur. Furthermore, the band performs full-fledged songs here, not start-stop eruptions of noise. A song like “Suffer the Children” would have been incredibly out of place on Enslavement. In fact, most of the songs here would have been out of place there — these are straightforward death metal songs, not grindcore blasts. Scott Burns makes this all the more apparent with his crystal-clear production. The resounding question, though, is whether or not all this is good or bad. Napalm Death play like a tight, muscular death metal band on Harmony Corruption (best highlighted by the aforementioned “Suffer the Children”), which puts them within the norm for the first time and puts them much at odds with their former selves. Whether or not you favor a death metal style to a grindcore one is a question worth asking, but the underlying fact of the matter is that Napalm Death are a new band here, one that plays powerful, albeit relatively straightforward, death metal. But only for this album. Their next album, Utopia Banished (1992), would spiral them off into a more experimental hybrid of grindcore and death metal, which is where they’d remain for years afterward — out there, somewhere in between. All considered, Harmony Corruption is a bit of a novel album for the band, though one that’s not especially remarkable in the big picture. The track ‘Unfit Earth’ features John Tardy from Obituary and Glen Benton from Deicide on backing vocals.