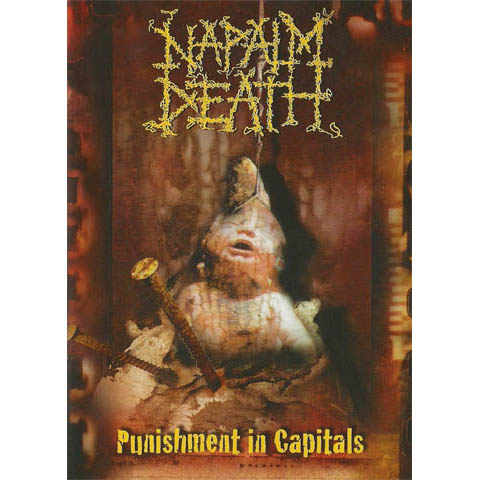 Napalm Death has always been an interesting anomaly in the metal underground: generally considered to be the inventors of grindcore, the band eventually became a ragged patchwork of punk, death metal, and hardcore that was simultaneously sloppy, technical, unwavering ugly, and downright vicious. And political — proof being this live dvd, shot in 2002 at a London animal rights benefit gig. Hence the anomaly; while slaughter, fantasy, and war are thematic crutches for much of the metal underground, Napalm is intent on righting the injustices of the world. Punishment in Capitals does a decent job of capturing the group’s focus and intensity on-stage, the band rampaging through 28 songs in 90 minutes, from haphazardly arranged early donkey punches “Scum” and “Lucid Fairytale” to latter-day pneumatic drillers “Can’t Play Won’t Pay” and “Breed to Breathe.” Visually, the live show is more than adequate, with enough camera angles to keep die-hards relatively interested throughout, even if sonically the live mix is a bit gutted (strangely, the between-song chatter of singer Mark “Barney” Greenway is mixed much louder than his actual during-song vocalizations). Strictly for droolingly devoted Napalm drinkers is a jittery, D.I.Y., 45-minute documentary tacked on as a bonus feature, with mostly Barney-centric interviews covering relatively interesting territory (the band’s political views) and the transcendentally mundane (what the band members eat before a show). Also added to the fray are two grainy cuts camcordered in Tokyo in 1996, and a half-dozen more culled from a particularly frenzied gig in Santiago, Chile, in 1997. Long-in-the-tooth Napalm punters will find plenty of meat and potatoes to consume in Punishment in Capitals, and the general no-bones-about-it approach nicely conveys the compelling grit of the hard-working and rightfully well-respected band at its center.