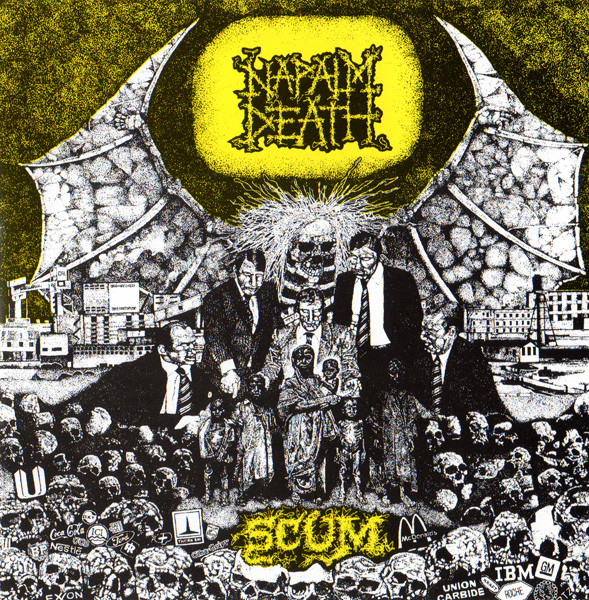 As a rallying call for what seemed like millions of bands to follow, not to mention the launching point for the varying careers of Justin Broadrick, Nick Bullen, Mitch Harris, Lee Dorrian, and Bill Steer, Scum deserves its reputation alone. But it’s also fun to listen to — a strange word to use, but no doubt about it, the album has its own brand of rock & roll kicks taken to an almost ridiculous extreme. Split between the original lineup, with Broadrick and Bullen, and the next one, with Dorrian, Steer, and Shane Embury, Scum is a portrait of a place, time, and state of mind. Opener “Multinational Corporations” is the deep breath taken before the plunge: skittering cymbals, low-key feedback squalls, Bullen’s rasped hatred — and then all hell breaks loose. The riffs by both the Broadrick/Bullen and Steer/Embury teams use hyperconcentrated Black Sabbath-via-Motörhead-and-Metallica approaches as starting points, but the moorings are cut loose when everyone concentrates on nothing but speed itself. The combination of hyperspeed drums, crazed but still just clear enough guitar and bass blurs, and utterly unintelligible vocals takes the “loud hard fast rules” conclusion to a logical extreme that the band’s followers could only try to equal instead of better. Interspersed throughout all this on various songs are more obviously deliberate constructions — parts of the title track, say, or the focused chug-and-stomp start of “Siege of Power.” They act as just enough pacing for the rampages elsewhere, where unrelenting, intense sound becomes its own part of weird ambient music, textures above all else. It’s little surprise the free jazz/noise wing latched onto Scum as much as wound-up-as-hell headbangers did worldwide. That practically no song survives past two minutes — much less one — is all part of brusque do-the-job-and-do-no-more appeal. The most legendary number as a result: “You Suffer (But Why?),” running at a mere two seconds.