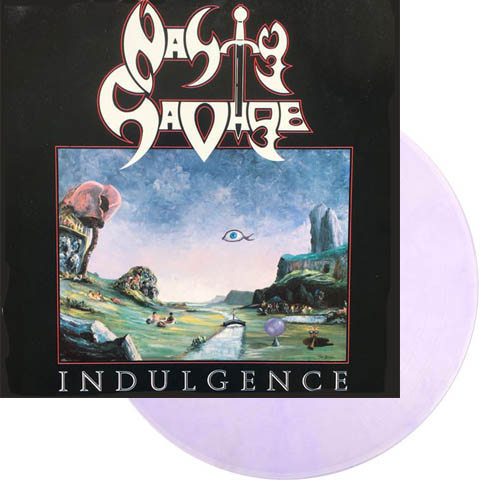 1986 was a year in which thrash metal finally made its presence known: loudly. Bands like Megadeth, Slayer and Metallica were churning out some of their best work (as it would turn out, some of the best work in the genre to date), and a wealth of newer bands were unleashing previously unheard, violent and energetic sounds. Seeing that Floridas Nasty Savage were already half arrived at this style on the s/t debut in 1985, it wasn’t a huge leap for the band to shift their focus towards an overall harsher follow-up. This transition occurred through three notable alterations. The first is through the increased thrashing of the guitars, which brought them in line with the standards of Anthrax, Exodus and Nuclear Assault while abandoning most of the classic/power metal overtones of the debut. The second transition is the vocals of Nasty Ronnie, which seem far more reigned in. He still visits the shrill heights from time to time, but most often works in his nasty, aggressive middle rage. And he’s not often fucking around here (except near the climax of XXX). Which leads us to the third mutation of Nasty Savage: the lyrics. The band have gone from tales of Metal Knights and the Dungeon of Pleasure to more serious fare here (song titles Incursion Dementia and Distorted Fanatic), and topics that deal in the day’s big ticket thrash lyrics issues, rather than sex slave fantasies or the walking dead. Add to this the very bizarre choice of an abstract landscape for cover art, and you’ve got a more mature band. Like many metal bands of this period, Nasty Savage had grown up, which is most often (but not always) a positive thing. At times, it can become difficult to determine which of the first two incarnations of Nasty Savage that I liked more. The innocent, well measured fuckery of the debut, or this more emotionally tense and scarring thrash band that approached their art with a renewed affection, the determination of a ballistic missile as it sights its one target? In the long term I’ve grown fonder of this album and Penetration Point than the debut…the tunes are simply that much more crushing and resonant. And there is no build up to this. No warning. The band break into Stabbed in the Back almost immediately and you can hear the transformation and sense of purpose here, a swift kick in the pants for the band’s Bay Area or New York peers to signify that the rest of the country was not far behind when it came down to the thrashing. The song maintains the good, clear production of the last album; the flurries of guitar melody and loud and present bass tone. But the writing shows an advanced complexity, and the riffs have a cruel spike to them which I’m guessing kept every local gator well clear of this band’s practice space. If I’m painting too grim a portrait of Indulgence, let me assure you that the band is still fun through the sheer pomp and violence of their ministrations. Divination is a peppy, mid paced rager with more bounce than a pair of unstrapped breasts on a roller coaster, Ronnie taking the opportunity to create a ghostly shriek before the bridge similar to King Diamond (or Realm, who would come later). XXX is even more raunchy, a lament, or rather, a celebration for all the innocent lost to smut through their adolescence. Yeah, Nasty Savage still commit their dirty thoughts to the music, but here there is a purpose. A cautionary tale. Title track Indulgence is vibrant and acrobatic thrash/speed metal with Ronnie’s vocals exploring both their lesser and upper ranges, and some of the band’s best lyrics yet:

Inferno is a WWII thrash piece with some sick, serpentine twists to the leads and melodies that seethe over the blitzkrieg of the hammering riffs (some of which would later be dubbed death metal). Hypnotic Trance is another of these power thrash hymns, with some excellent drumming and leads, while Incursion Dementia throws a little nod back to the roots power metal of the band’s waking years, one of the best and most bad-ass tracks on this album. Distorted Fanatic is also quite good, thanks to its evil Slayer-like opening melodies and the tightly spun, engaging thrash dynamics of the verse guitars. The album ends with an untitled 9th instrumental track in which the musicians take a few more liberties, but it’s hardly the escapist shredder; the band could very well have included vocals here. While I’m completely on board with the progressions the band has made from the debut to Indulgence, I’d have to say the album remains level to that in terms of its overall, lasting quality. Like Nasty Savage, it still sounds quite fresh today, though many other thrash and death metal bands have released superior product since. This was by no means a first class thrash metal album for 1986. The architecture is not as brilliantly structured as a Master of Puppets, and it’s not nearly as wild or aggressive as a Reign in Blood or Darkness Descends. But once you get past that refreshing foam on top of the glass, to the bulk of the beer within, Indulgence would represent one of those first, fulfilling gulps you take on your plummet towards vomiting and unconsciousness.