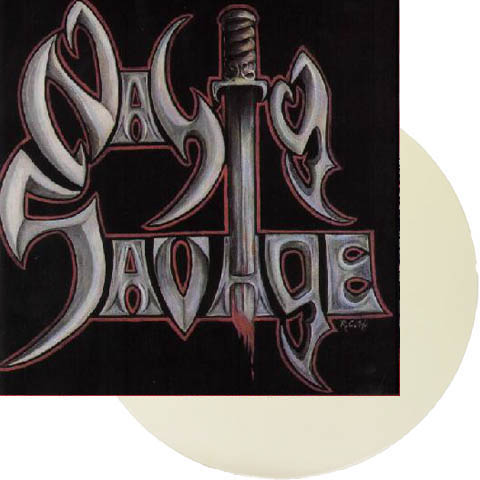 2020 reissue on white vinyl with insert and poster. Limited 200 copies

The first full-length of Nasty Savage showed a band that was taking the fast lane. Back in 1985, the US-Americans burst into the thrash metal scene in a very admirable manner, because they created their own niche. Right from the outset, the self-confident formation did not head for the most brutal approach. But its songs had a certain depth, a profound appearance with a long-lasting effect. In particular the pieces of the A side left no room for optimization. Apart from that, the exceptionally different song formulas were remarkable. The debutants of Nasty Savage offered a wide spectrum that could usually not be taken for granted. For example, the straight Metal Knights was a simple metal rocker with likewise simple lyrics. Especially the chorus marked a triumph of primitive poetry. But in terms of music, the song did not disappoint. Despair their rather ordinary configurations, the rolling main riff and the mid-paced rhythm formed a vigorous number. By contrast, Fear Beyond the Vision surprised with a very unusual vocal line in the chorus. The extraordinary design of this number combined heaviness with fragility in a previously unknown manner. Lead singer Nasty Ronnie shocked with high-pitched tones that lent the song a mystic aura. His suddenly occurring sharp yells were an almost unique feature. Surely, King Diamond also knew how to cover an extreme wide range of tones. But Nasty Ronnie could not be confused with the squeaky voice from Denmark. Firstly he had no painted face and secondly he used his voice in a more stringent yet less variable way. However, his abrupt changes from normal singing to shrill cries left its mark. One highlight chased the next during the first eight tracks. Even a brief intermezzo, only based on fragile and soft guitars, enriched the album. But it goes without saying that the most impressive pieces did not lack of harshness. Irrespective of its more or less melodic appearance, Asmodeus scored with profound leads and stoical heaviness and its guitar solos hit the nail on the head. Better still, the guitar excursions enriched each and every song, because they fitted flawlessly in the respective track while combining musicality and gruffness. Not at last because of the perfect embedding of the solos, the songs had a remarkably good flow. The last highlight was The Morgue and this almost epic track could not be compared with the pretty simple yet strong tunes such as Metal Knights or Dungeon of Pleasure. (By the way, the latter was also fantastic and the explicit lines like “The bitch is bound and helpless / She’s screaming for more” expanded the lyrical horizon of the violent scene by adding the combination of force, domination and sexuality.) Anyway, The Morgue was based on morbidity, melody and highly exciting riffs, while Nasty Ronnie’s charismatic style ensured the fantastic overall impression of the song. Nevertheless, the instrumental parts were also really excellent. Either they were based on strong riffs or they surprised with suddenly emerging harmonies which generated an unexpected melody. At the end of the album, the band was unfortunately running out of ideas and this is the only reproach which can be made against Nasty Savage. The last three tracks were forged when the iron was already cold. The vast majority of the here presented songs was fascinating, because the pieces revealed their own personality. Even 30 years after their release, they still illustrate the very individual approach of Nasty Savage and simultaneously they herald the strength of the then juvenile movement called thrash metal.