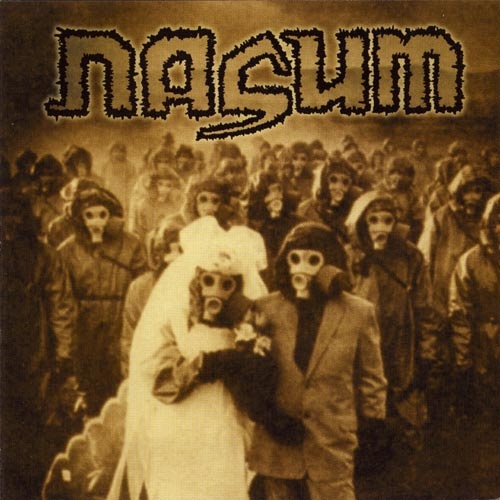 With 38 cuts in as many minutes, Inhale/Exhale is absolutely relentless — Nasum builds on the influence of their Swedish hardcore and death metal predecessors to create a grindcore aesthetic which won’t win any new fans to the genre but will delight the converted. Inhale/Exhale holds nothing back, it has no remorse to the listener. Nasum are a band that you don’t have to think about because the music just comes right at you. There is so fucking time to think! Nasum are definitely the epitome of great grindcore. Songs ranging from seconds to the one minute mark, Nasum certainly know how to keep the listener interested. Instead of blast-beats through the whole album, Nasum utilize some groove parts but they don’t abuse them. Nasum show a grindcore band can have groovy parts and still have a grind sound. The guitars on this album are awesome. I don’t think any other band can have a sound like the guitars on this album. The guitars have a very raspy yet strong as a hurricane sound. The vocals range from traditional yelling, somewhat punk sounding yells at times too and then there are loud as fuck yells that mix with screaming. The bass is also very chunky-sludgy-like so they make the music really heavy. The drumming rangings from simple patterns to super fast poundings. The instruments mesh together amazingly to create one hell of a grinding sound. Nasum’s lyircs on this album are very strong. Unlike some bands that are very politically incorrect that just bash the government, Nasum use there knowledge to a good use. The lyrics are somewhat negative and positive. You can moshing around to Its Never Too Late and then you read the lyrics and they somewhat have a positive feel to them:

Start to think, start to live
make your best, make an effort

I think the lyrics are very well written and go along to the music well. The song Inhale/Exhale has a groovy sound to it but still holds some grindish parts just like some other songs. Overall, if you’re into grindcore then get this album (you should alreading freaking have it). If you think twice about grindcore and you don’t know what to do then get this album because really I think it’s better than Napalm Death. If you don’t like grindcore, then i dont understand why you read this in the first place