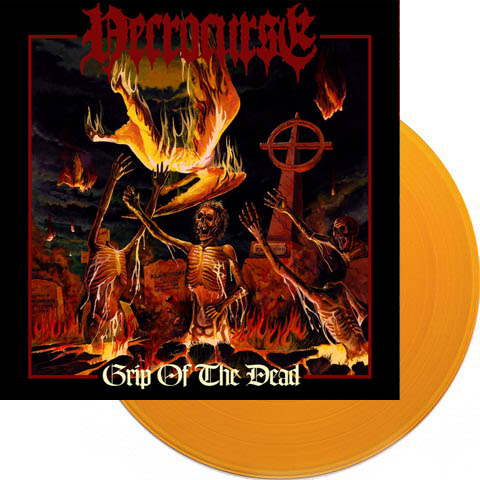 If albums like Morbus Chrons Sleepers In The Rift, Necrovations eponymous sophomore, and Tribulation’s recent Formulas Of Death are any indicator, its the season of Swedish death metal ceasing its long spell of fucking around and paraphrasing its own 90s blueprints to the point of utter sterility and senility. While it doesn’t go quite so far out on a skeletal limb as these other acts, and its membership hardly a rabble of newcomers to this scene, Necrocurse’s full-length debut Grip Of The Dead is yet another entry into the cemetery sweeps, a compact, crushing revision of its more overt influences into something digestible to the nostalgia hunter who seeks a little gruesome authenticity in his death and black metal. It interprets the fundamentals in its own way. I won’t say it’s thoroughly memorable or catchy, or as great as some of the works by several of its individual members, but I had some fun with it as a fiendish exhibition. First off, if you don’t enjoy Per Hellbutcher Gustavsson, then fuck right the fuck off. If, on the other hand, you have found yourself drooling over his past works in Nifelheim, one of the more raw, wonderful and abusive acts in that whole European blackened thrash market, and wondered to yourself what if Per had gone on to front one of the formative Swedish death metal bands in the early 90s rather than walking the blacker path?’ (which he sort of did for a brief time on stage with Treblinka). Grip Of The Dead is the answer to that question, and it’s an answer that stabs a pitchfork straight up your nether while sipping blood from a goblet formed of a Christians skull. Expect some of that old Sunlight guitar tone to be dripping in Hellbutchers infernal inflection, and you’ve pretty much got the gist of what’s happening with this one. The arrangement of the riffing is duly primitive, with a mixture of up-tempo tremolo picked passages and slower, lodestone grooves, but I found that a lot of the actual note progressions were somehow more primitive and didn’t just ape Entombed. There were a few grooves which reminded me of Massive Killing Capacity era Dismember on their first three records, or Runemagick (a band that the Necrocurse rhythm section hails from), and the guitar tone is clearly meant to represent that period, but the inclusion of Per’s vocals really transforms it into some even more nihilistic. Great examples include Death Metal Rebels, Speed to the Grave or Grip of the Dead itself, which hammer along with a fiery if simplistic energy. The bass lines are fairly minimal, but provide a lot of low end depth that creates a hellish throne for the riffing and snarling. Beats are also held back from being too spiffy or indulgent in terms of their speed and fill work; instead, the kick drums are live and workmanlike, and there’s a nice low din of crash to the cymbals and hi-hat which enforces the humble performance. A few doomed melodies will often erupt over a rhythm guitar, and the leads are efficaciously messy and molten, but not to the point where they feel as if their potential impact wasn’t carefully planned. It’s not mind boggling. Nor is it science. Grip Of The Dead is not an album about innovation or technicality whatsoever, it is simply clashing together the aesthetics of two parent genres to produce something repulsive and entertaining, with absolutely zero degree of pretentious intentions. It’s also not perfect: there are times when I felt like the guitar progressions were a little too bare bones. Not necessarily too familiar, but just not constructed with enough compelling charisma that they can distract the ear away from Hellbutcher’s snarls. A group whose roster hails from luminaries like Runemagick, Swordmaster, and Nifelheim could probably bring a lot more A-game to the table. But in of itself, the very idea of allowing Gustavsson to retch rancidly over some primitive, pummelling death metal is a brilliant one. There is a slice of the underground who will love this record just for its honesty and traditional values, but I think it could still be perfected with some stronger, eviller sounding chord progressions and dynamic writing.