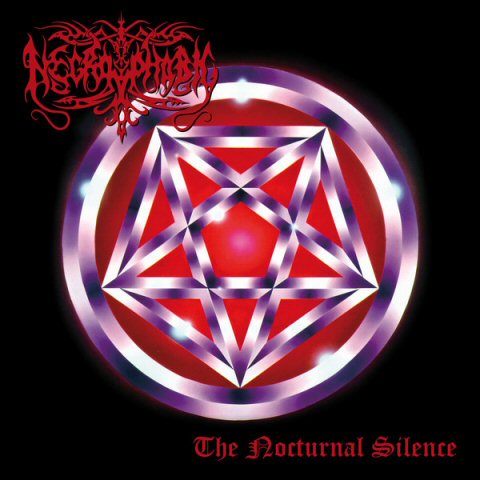 ‘The Nocturnal Silence’ is the first full-length album from Sweden’s Necrophobic. The album was recorded in Sunlight Studio in Stockholm, in March 1993. It was produced by Necrophobic and Tomas Skogsberg. Despite being recorded in this well-known studio, the album definitely has its own atmosphere and is not typical of most Swedish death metal. The band was formed in 1989, and had gained much attention through the release of two demos, ‘Slow Asphyxiation’ and ‘Unholy Prophecies’. The stood out from the mass of bands in Stockholm by possessing a bit more technical skill and also featuring less guttural vocals. Anders Stokirk utilizes a style similar to Masse Broberg of Hypocrisy/Dark Funeral, but not as deep. The style of vocals, some of the riffs, and the lyrical content have more of a black metal feel than the usual Stockholm sound. One of the real gems of this album is the title track, ‘The Nocturnal Silence’. The acoustic intro and the brilliant solo that starts the song really imbue the listener with visions of the full moon in the blackened night sky. Then, the satanic ritual begins as the song takes off. The vocalist sounds as if his throat has been shredded by broken glass and the result is very good. The song has a certain doomy quality, until things speed up. Here, the fast tremolo riffs dominate. It is a real shame that many people are unacquainted with this album, as it is a true classic. Parland’s solo near the end is perfect as well. There really is little or nothing to complain about when it comes to this album. On every back cover and in every booklet of this original black mark release it says that track 5 is a song called ‘Shadows Of The Moon’. That song is only on the American pressing, licenced by Cargo Records on all other copies, track 5 is a song called ‘Inborn Evil’. The story is that after the recording of this album, the band felt that ‘Inborn Evil’ didn’t get the right feeling as they wanted and decided to drop that song from the album. Then, in the mastering session, the wrong song got dropped, the instrumental song ‘Shadows Of The Moon’. The booklet and covers were already made and the band didn’t find out about this error until they heard the finished album. ‘The Nocturnal Silence’ is an incredibly strong debut album. This shows the value on toiling in the underground, playing shows and recording demos before putting together an album. Not only is the musicianship excellent, the songwriting was well thought-out and Necrophobic easily achieved what they set out to do. This is a classic piece of Death Metal history and one of the best albums to ever be recorded at Sunlight Studio.