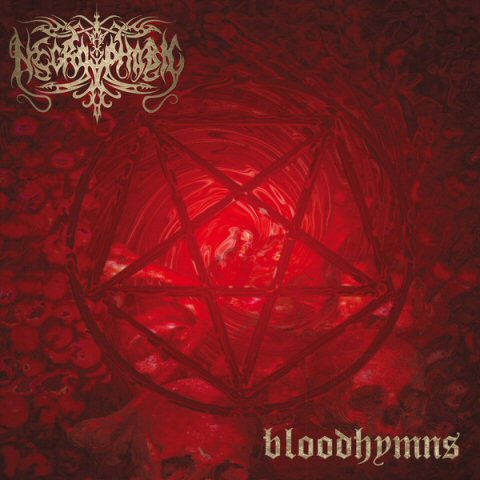 Original 2002 press with Technicolor in the matrix

To be blunt, Necrophobic doesn’t offer much innovation to the death/black/thrash fracas. But full-length number four, Bloodhymns, is a consistently entertaining listen, this Swedish (of course) outfit offering a nice combination of melody and aggression in the blood-spurting vein of Slayer and In Flames, proving that this group, toiling since the early ’90s, may be one of the metal underground’s overlooked talents. That being said, Bloodhymns, at heart, is a genre exercise, albeit a well-written and -performed one, a death metal battlefield strewn with quite memorable razor-sharp riffs and frosty melodies that make the band so obviously…Scandinavian. The production of (who else?) Tomas Skogsberg is thick ‘n’ meaty, guitars cranked, pummeling drum sound, generic death vocals resting calmly amid the sudden tempo changes and smartly conceived arrangements that rely on hooks and catchy phrases rather than the jarring, disjointed technical proficiency that too many death metal acts misconstrue as “challenging songwriting.” Fans of the genre could do a whole hell of a lot worse than Bloodhymns, even if Necrophobic doesn’t really aspire beyond the confines of generic Euro-death (what would a Scandinavian act sound like in an American studio with an American producer?), and thus remains a step behind creative innovators like Opeth, Nile, and Immortal.