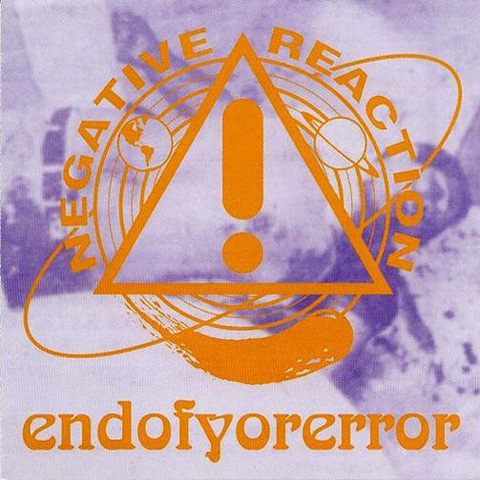 2003 reissue with the bonus track Dianoga, taken from The Orbit EP 1998

I’ll never know why Negative Reaction isn’t mentioned in the same breath as other 90s, US sludge innovators such as Cavity, Grief, Eyehategod, Buzzoven etc. Their debut album Endofyorerror was released in May of 1995 and its an ultra mean album that is creeping Doomcore with aggressive to weird bawling or other sounds. The vocals set the overall mood from the get go with Ken Bones (guitarist, vocalist) screaming his living brains out with hardcore tinged madness. Then the music itself – wickedly slow slices of stoner doom, that suddenly erupt into life with a hail of guitars reigning down, before settling back into the monstrous-sounding, guitars-heavy, monumentally slow rhythm mayhem of its truly sludge-laden, doomy approach. When these guys aren’t pummelling you with their intense riffs, it’s the vocals up front. Musically the guitar work reminds me of everyone from Iommi, to Eyehategod, COC down the line. It’s punk and classic rock influenced I like I believe. Instead of the original bonus songs we here are treated with the song Dianoga off the Orbit EP. Nice for all, who like this kind of noise… I personally think it’s a bit too extreme – but not bad. Any fan who likes bands such as Grief or Sleep should check this out