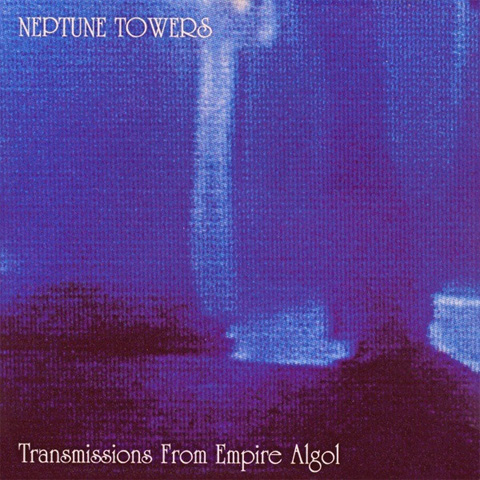 Fenriz (Darkthrone, Isengard/Storm) ambient project. Fenriz released two albums with Neptune Towers. A third album Space Lab was recorded in 1994 but never released. 4 excerpts from that unreleased album can be found on the 2012 re-issue of Transmissions From Empire Algot. Most people have bought this one because of Fenriz but this album in no way resembles black metal. There was a period in the mid-90s when it seemed that every black metal musician had to have his ambient or faux-medieval project. Let’s be frank: most of this stuff was terrible and is best forgotten by everyone. However, Neptune Towers is not like anything else produced by anyone involved with black metal, I’ll wager, and furthermore doesn’t sound like much ambient fare created on synthesizers today. This is the second installment of what we might call the Empire Algol saga, which was created by Fenriz, reportedly under the influence of cold void visions inspired by magic mushrooms. I don’t know what kind of equipment he used to record these albums, but I sure would love to find out. Fenriz stated in interviews that the value he saw in this project in later years was that it might succeed in interesting listeners in the early 70s work of Klaus Schulze and Tangerine Dream, and while I doubt he had access to the kind of gorgeous old synths and organs and tape machines that the German pioneers helped to introduce to the world, his work is almost cut out for him here. The debut was a rather monotonous if still fairly evocative affair, making use of a very few effects and drones awash in delay and a sparse variety of sound. On Transmissions from Empire Algol, Fenriz has expanded his palette to include very real and analogue-sounding organs, crazy modulating tones and almost aquatic burbles, while still playing with pitch control and some edgy rumbles that wash in and out like stellar waves. You will, if you enjoy such things, instantly be reminded of what Tangerine Dream was doing up until 1974 or thereabouts, and of their various compatriots in the German scene at the time. If you’re not familiar with this marvelously eclectic and often incredibly psychedelic exploratory period in ambient music, you must trust me when I say that this is a very good thing and that it doesn’t hurt at all to have more music in this vein. Some modern progenitors, such as Arc, may be a bit more professional and expansive with their soundscapes, but it really doesn’t matter, because for thirty-four minutes here, Fenriz transports us into the lonely desolation of outer space (that is, the interstellar void) and compels us to marvel at the vastness of the cosmos, and not once, if you are a receptive listener to this sort of thing, will you get bored with what is going on. You see, there is actually quite a bit of movement taking place in these two sections, and despite the necessarily slow shifting of such things, for this is ambient music after all and not some sort of bombastic and fruity symphonic thing, which is the sort of stuff Tangerine Dream succumbed to in the 80s, there are fragments of very memorable melody to be found, especially as we move closer to the latter half of the album. This isn’t as bleak and starkly desolate as “Caravans to Empire Algol”, because it seems that we now know there is in fact life around the Demon Star, hence the “First Communion” track obviously refers to some form of contact with alien life, while the oscillating tones Fenriz enjoys playing with (can’t you just picture him excitedly twiddling all those knobs?) must symbolism an attempt at communication. At one point toward the end of the first track a huge-sounding organ begins to play a captivating melody and it is like the first step on an oxygenated planet that is not your own … a relief, in a way, as you’ve been drifting in space for so long, but tense and disconcerting, because you don’t know what awaits! There’s not much else to say about this. You either like this sort of thing or simply find it boring or tedious.