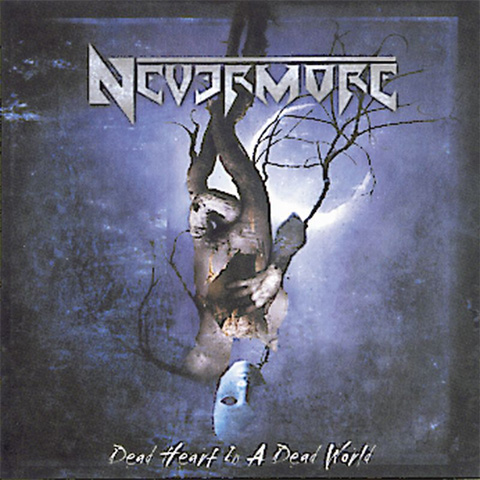 The fourth in a list of solid releases from Nevermore, Dead Heart, in a Dead World is possibly the group’s most accomplished recording. For the first time, Jeff Loomis handles all the guitar duties himself, giving the disc a musical continuity that was sometimes lacking on prior efforts. Nevermore co-founder Warrel Dane (vocals), Jim Sheppard (bass), and Van Williams (drums) join Loomis on this 2000 Century Media offering. All four members demonstrate great command of their instruments, but Loomis’ guitar playing stands out. Bold and inventive, the combination of nu-metal and ’80s golden-era metal riffing propels Dead Heart, in a Dead World and Nevermore ahead of the American indie metal pack. “The River Dragon Has Come” and “We Disintegrate” are just two superior examples of Loomis’ dissonant, detuned grooves. Dane’s moaning almost sinks mellower numbers like “Insignificant” and the title track, but Loomis provides the buoyancy these otherwise dull songs need to become listenable — in fact, they’re almost interesting. The members of Nevermore were always ready to challenge themselves, and Dead Heart, in a Dead World confirms the wisdom of that ethic through the realization of the band’s massive potential.

Track list:
1. Narcosynthesis
2. We Disintegrate
3. Inside Four Walls
4. Evolution 169
5. The River Dragon Has Come
6. The Heart Collector
7. Engines Of Hate
8. The Sound Of Silence
9. Insignificant
10. Believe In Nothing
11. Dead Heart In A Dead World
12. Love Bites-Judas Priest cover
13. All The Cowards Hide
14. Chances Three