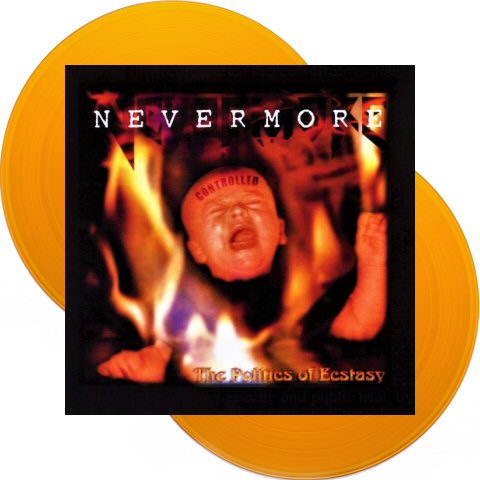 The Politics Of Ecstasy
Coming off of their mild success and good reviews of their self-titled debut, Nevermore released ‘The Politics Of Ecstacy’, an album that finds Nevermore at their angriest, and also their most political. This album was rhythm guitarist Charlie O’Brien’s last with the band, before he left to join Cannible Corpse. O’Brien’s guitar sound reminds me a lot of Jon Schaffer’s on ‘Burnt Offerings’, as Nevermore had not yet incorperated the 7-string into their sound. Except for ‘Seven Tongues Of God’ and ‘42147’, Jeff Loomis plays a very limited role; his soloing is pretty simple and short. This album is has about the same amount of thrash/power metal feel as does Iced Earth’s ‘Burnt Offerings’. Not really the best album to get if you are getting into Nevermore, but with out a doubt this is a good album, although they would top this with every successive album afterwards.

In Memory
Sporting some of singer Warrel Dane’s most extreme vocal workouts, In Memory is an impressive musical display of neo-progressive yet heavy melodic metal. With an identical band lineup and producer Neil Kernon returning to helm the console, the results on this follow-up to 1995’s eponymous debut are predictably similar. The bombastic medley of Bauhaus cuts, “Silent Hedges/Double Dares,” is representative of the continuing evolution of the band and its heavy rhythmic reworkings. While the melodies are commercial, Nevermore refuses to get bogged down in technique and, in so doing, avoids the sterility and weakness that some associate with a certain other Seattle melodic metal band. With subtle, clean performances mixed with all-out metal hollering, Dane sounds like a doctorate-level student of Geoff Tate’s vocal style (“The Sorrowed Man” being his thesis). Perhaps borrowing a little too heavily from Queensrÿche, Dane and his bandmates still infuse enough of their own passions and personality to make the music on In Memory their own.