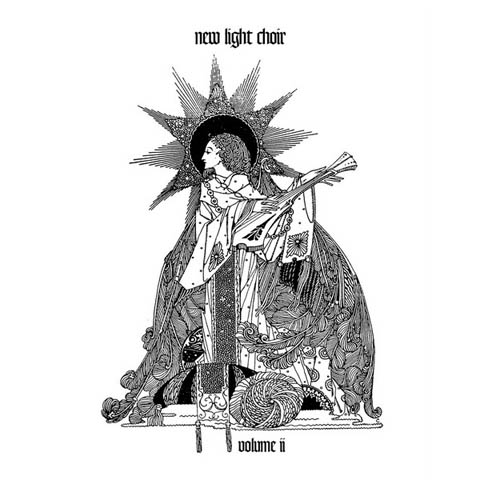 Times are changing. A couple of years ago an experimental act such as New Light Choir would not have stood a chance to make it. Now, with free-thinking bands like Aktor, Dawnbringer and Hammers Of Misfortune around, people are having more of an open mind. Volume II, as the title already suggests the band’s second album, hits the current zeitgeist perfectly. New Light Choir came into being in 2010. It’s a collaboration between two musicians: John Niffenegger (vocals, guitars, bass and M-Tron) and Chris Dalton (drums). Chris explains how the band came about in the first place: John and I played in many bands prior to meeting. He had a batch of songs that were very broadly heavy rock and he asked if I would be interested in rehearsing and subsequently having them professionally recorded. As our relationship unfolded, the more we found we had in common. Both of us loved the fact that nothing was either too metal or not metal enough for our creative process to tackle. Well before the first recordings were done, we knew we wanted to continue to work together. And the more comfortable we became with one another, the heavier the material and the wider our grins became. Chris Dalton adds: The first New Light Choir recordings saw very limited release. They were essentially pressed as CDs and handed out to friends and family. It was much more like a demo, though the recording, mixing and mastering were all top-shelf professional. Volume II was voted Demo Of The Month by Rock Hard chief editor Boris Kaiser in issue 333. Stylistically songs such as “All I Need”, “Frost And Fire” and “April Witch” are, not unexpectedly, really hard to pin down. Chris tries to describe his personal metal evolution: “I was sixteen in 1984. John was sixteen in 1991. Those are two of the most important years in heavy metal history. My year was engulfed by the sounds of Accept, Mercyful Fate, Queensrÿche, Iron Maiden, Metallica, Loudness, Slayer, Torch, Venom, and Exciter. John’s year was consumed by Maiden, Trouble, Candlemass, Solitude Aeturnus, Bathory, Tiamat, Paradise Lost, Cathedral, Entombed, and Confessor. And both of us now bring twenty-five more years of experience as fans of this music in our respective artistic toolboxes. So, although there are many other inspirations and influences creeping through from other sources, the roots of the proverbial heavy metal mountain run very deep. When listening to Volume II, very early Rush does indeed spring to my mind, and also a lot of ’80s Goth Rock, coupled with some early proto-metal. Could the band live with that description? It’s a very eclectic mixture but it surely works…
Chris tries to explain: Descriptions are always a tricky thing, aren’t they? The ‘70s heavy rock act that John and I have the most shared passion for would be Ulrich Roth-era Scorpions. Scorpions, Thin Lizzy, UFO, Rainbow and Rush are all in a similar category to my mind. They are the bands that bridge the technicality/creativity gap between the titans Led Zeppelin, Black Sabbath, Deep Purple and the N.W.O.B.H.M. There is much of that spirit in our veins.”