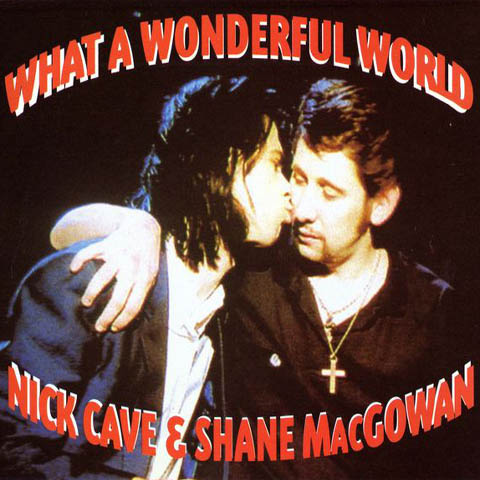 Nick Cave and Shane MacGowan, two of the most dynamic singers you’re ever likely to meet. Nick Cave is an artist who have had a gargantuan career in the limelight. The Australian singer has delivered a lorry load of records and one-off singles. A particularly special release of the latter would see Cave alongside long time friend and former lead singer of The Pogues, Shane MacGowan, performing Louis Armstrong’s What A Wonderful World. Back in 1992, with both artist’s careers entering a new dawn of reduced activity and prolonged legend status, the pair put the prolificacy of the previous decade aside and brought the world a one-off cover we never knew we needed. It’s truly one of the most unique covers you’ll ever hear. Billed as a Christmas song and aimed at the coveted Christmas number one spot for 1992, Cave and MacGowan ditch their bands (The Bad Seeds and The Pogues) in favour of a drunken and swirling rendition of Louis Armstrong’s 1967 ode to the beauty of the earth. Cave has often thrown his hand at covering a famous song but this is undoubtedly the biggest song he had ever attempted. It feels fitting that the pair have ditched their bands because on this performance the two men sound as if they only have one another in the whole entire world. Like two lost sailors peering over the edge of the world and toasting life as they know it. Displaying the same kind of energy and class one might expect to see in two drunks propping up the bar giving it their all at Karaoke. It’s a rendition of the song filled to the brim with the pair’s balancing eccentricities. While Cave is demure and confronting, MacGowan is poetic and dreamy — in that whisky-breath kind of way. It makes for one of the more interesting covers of Armstrong’s classic, as they turn the protagonist of Armstrong’s worldwide love letter into something far darker, far grittier, and far more real. It’s typical of their work separately, as they each employ a sense of world-weariness to the performance.