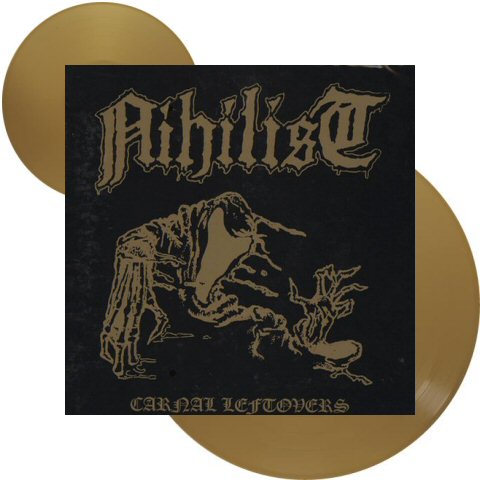 Gold vinyl with gatefold cover and printed innersleeve with a 7″ mounted in a pocket.

Nihilist would end up being known more as the prototype for Swedish death metal legends Entombed, but in 1988, the young group played some of the most extreme music ever, taking cues from Venom as well as Napalm Death in forming a sound that would eventually become legendary. This luxurious Nihilist vinyl boxset ‘Carnal Leftovers’. It includes all studio recordings of the legendary pre-Entombed band on five separate 7’ EPs. ‘Carnal Leftovers’ also includes a 16-page booklet in the size of a 7″ sleeve with a foreword by Alex Hellid (Nihilist/Entombed), an introduction by Daniel Ekeroth (author of the ‘Swedish Death Metal’ book), liner notes by Ula Gehret (writer for Metal Maniacs), comments from various musicians (Asphyx, Dismember, Watain, Kaamos, Autopsy, Death Breath, Necrophobic, Carnage, Grave, Edge Of Sanity and more) as well as loads of old photos, flyers and old school designs