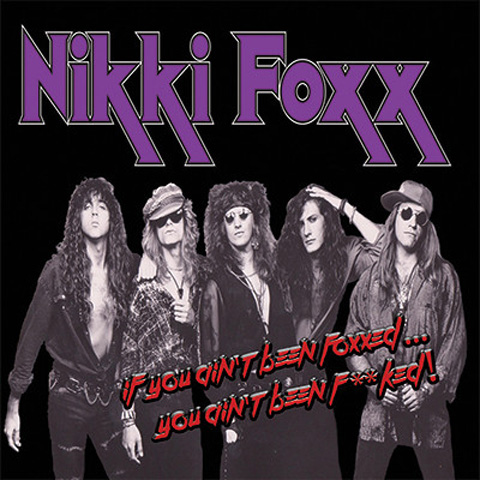 Raw, untamable and unapologetic, Nikki Foxx oozed onto the Chicago scene in 1989 as the Midwest’s #1 Bad Boys, bringing sleaze rock to a whole new level. With a bottle of Jack Daniels in one hand and a big fuck you coming from the other, the band won the respect of fans and fellow performers, appearing with countless national acts such as Cinderella, David Lee Roth, Ratt, Warrant and Great White, all while snagging some impressive honors. In 1990 the Chicago Rocker named Nikki Foxx “Best New Hard Rock Band.” In 1991 lead vocalist Lee Razor (Lee Philip, Haze Lee Finn…whatever the hell he answers to) won 2nd place for Chicago Rocker’s “Favorite Hard Rock Vocalist,” and the band followed up in 1992 with the Chicago Rocker award for “Favorite Hard Rock Band.” Though the guys partied hard and lived life on a razor’s edge the music was always their lifeblood, pounding sleaze and grit through the veins of their loyal following via one of the most unforgettable, unpredictable, what-the-fuck-just-happened stage shows. This disc, packed with classic favorites, brings you the music of founding members Lee Razor on lead vocals and Lenny Vitale on guitar, as well as John Davidson on bass/vocals/keyboards, Brian “Strutter” Martin on guitar and Mark “Spyder” Pyszka on drums. Nikki Foxx thanks all who partied with and supported the band throughout the years. Here’s to you. We hope this album brings back some memories, and maybe a dirty secret or two. Peace out.