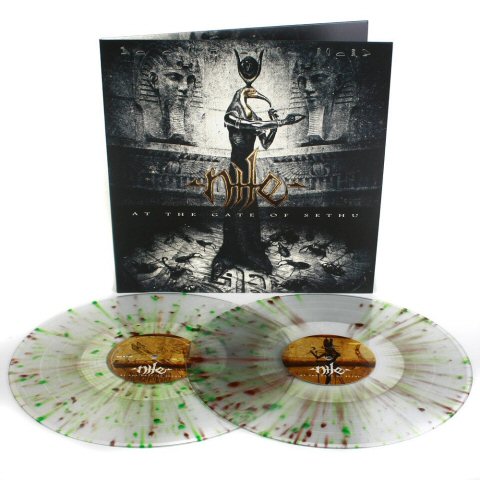 Nile -At The Gate Of Sethu dlp [splatter]

At The Gate Of Sethu can be considered a return to the era of Amongst The Catacombs Of Nephren-Ka and In Their Darkened Shrines with main man Karl Sanders delivering the most evil vocals of his entire career, while his sidekicks are creating massive sound walls of pure dooming, nightmarish atmosphere around you, from which you cant escape. Commented Nile mastermind Karl Sanders: Seth Siro Anton has designed the cover. I have been a fan of Septic Flesh a long time, and as Seth expressed interest, I knew that he would deliver a great job. I would say his work is easily the best we’ve ever had. He has captured the darker side of the sound of Nile and reflected the music and ideas, the heart and soul of Nile are forming. Seth is a very talented man and understands exactly who we are. Added Seth Siro Anton: It is no secret that I admire the powerful stylistic lines of the magical symbols that still transmit the aura of ancient Egypt, preserving in time the ancient mysteries. Also, I am fascinated from the final frozen moment of the flesh captured in an eternal sleeping stasis, at the completion of the mummification process. So, with a great pleasure I accepted the challenge, to visualize the new masterpiece of Nile, ‘At The Gate Of Sethu’. Regarding the album, Karl said, It’s in similar territory to other Nile records in that a lot of it stems from Ancient Egyptology and sort of has underlying modern themes tied in. We haven’t abandoned our identity and I don’t believe you should fuck over your fans. If your fans like what you do, and you change too much of what you do, fans don’t like it. What matters to me is when I’m out on tour and I meet the actual fans and they share their thoughts those are the people that I listen to. There’s a lot of new ideas within the realm of what we do that we tried to incorporate. We studied real hard on the guitar and have lots of new riffs and musical ideas. There are a lot of surprises on the record. Overall At The Gate Of Sethu was created true to a credo that Karl sums up with the words: Were following a high and pure purpose creating music in order to plant evil emotions into the hearts, brains and ears of our listeners! Mission accomplished!

Track listing:
1. Enduring The Eternal Molestation Of Flame
2. The Fiends Who Come To Steal The Magick Of The Deceased
3. The Inevitable Degradation Of Flesh
4. When My Wrath Is Done
5. Slaves Of Xul
6. The Gods Who Light Up The Sky At The Gate Of Sethu
7. Natural Liberation Of Fear Through The Ritual Deception Of Death
8. Ethno-Musicological Cannibalisms
9. Tribunal Of The Dead
10. Supreme Humanism Of Megalomania
11. The Chaining Of The Iniquitous
12. Enduring The Eternal Molestation Of Flame-instrumental
13. The Inevitable Degradation Of Flesh-instrumental